A Great Parliamentarian; a Great Englishman 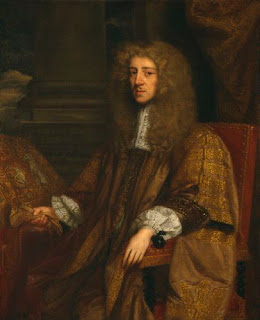 History's judgement on Anthony Ashley Cooper, first earl of Shaftesbury has not been kind, that much is true, though I would urge anyone interested in a more balanced and objective view to have a look at The First Earl of Shaftesbury by K. H. D. Halley, still (she says) the best biography on the Whig leader.

One thing should be made absolutely plain: the Popish Plot was indeed a groundless conspiracy, during which innocent people lost their lives. For men like Titus Oates it was no more than an opportunity to seek recognition and riches by defaming and maligning Catholics. Shaftesbury stands guilty by association, and by the use he made of Oates and his slanders. But it is crucially important to understand that Shaftesbury's hostility to Catholicism was first and foremost political not confessional in nature.

Earlier in his career he had advised Charles to stand by the Declaration of Indulgence of 1672 because it extended freedom of conscience to Protestant dissenters, even though it was criticised in Parliament for its supposed sympathy for Catholics. His hostility towards Catholicism grew in intensity as it was perceived more and more as a political threat to the English constitution, a threat to the liberty of Parliament that Shaftesbury valued most highly. I can find no better clue to Shaftesbury's whole attitude at the time of the Popish Plot than the observation of one MP who said "Papists are enemies not because they are erroneous in religion but because their principles are destructive to the government."

You see, there is a well-established tendency to look at this whole period of English history as merely one of hysteria and anti-Catholic bigotry. There is, however, quite another dimension which is almost completely overlooked. Forget Oates and his ghastly associates; look more closely at the Parliamentary debates. It is there you will discover some of the real substance. I’ve gone through all of the exchanges made during the Exclusion Crisis point by point, line by line. In one session on 27 April 1679 Sir Henry Capel observed;

From Popery came the notion of a standing army and arbitrary power...Formerly the crown of Spain, and now France supports this root of popery among us; but lay popery flat, and there's an end of arbitrary government and power. It is a mere chimera or notion without popery.

The long-term danger, as Shaftesbury and his party believed, came from the France of Louis XIV. But even at home he was mindful of the misuse of power in parts of the United Kingdom; for Britain had its very own Louis in the person of John Maitland, Duke of Lauderdale, Charles' Secretary of State for Scotland, who ruled the northern kingdom with powers akin to that of a Roman proconsul. Here is part of Shaftesbury's speech from the debate of March 1679;

Popery and slavery, like two sisters, go hand in hand; sometimes one goes first, and sometimes the other, in a door; but the other is always following close at hand. In England popery was to have brought in slavery; in Scotland, slavery before and popery to follow...Scotland has outdone all the eastern and southern countries, in having their lives, liberties and estates sequestered to the will and pleasure of those that govern.

So, you see, for him the greatest risk was to liberty, from whatever direction it came. Yes, his understanding of liberty is far narrower than our own; and yes again, he was not a democrat, in the sense that we understand the term. He was, rather, a great Parliamentarian, one of the greatest in English history, and as such stands comparison with John Pym and John Hampden, and I have chosen these parallels with care.

Many of Shaftesbury's contemporaries satirised him as 'Lord Shiftsbury' because he changed political clothes so often: first a supporter of Charles I during the English Civil War and then a supporter of Parliament; a supporter of Cromwell, and then an opponent; a supporter of Charles II and then an opponent. Yet there is a consistent thread through all of these shifts and changes: a steadfast support for parliamentary process and constitutional liberty. He never attached himself to any regime that that set itself against frequent parliaments. He only moved into permanent opposition after James duke of York, a man he never had any time for, was known to have converted to Catholicism. He may have feared Catholic absolutism; he feared James even more: "...heady, violent and bloody, who easily believes the rashest and worst councils to be the most sincere and hearty." And those familiar with James as king will recognise how accurate this assessment was to be.

No democrat, then, but a party leader; one who was prepared to extend the debate on the future of the constitution into the public arena, using all the means at his disposal. He did so because he was ever more aware of the impotence of Parliament in isolation from the people. Petitions, pamphlets, parades, electioneering; simple messages for even simpler people; it was all part of the process of engagement. It was the beginning, in essence, of the modern political world, in all of its good and bad forms.

His success here must surely be measured by the fact that the Tories, his great rivals, began to adopt the same methods. It was indeed a high risk strategy: in the end he lost everything, dying as an outcast and an exile. But he had fought with single-minded determination for what he believed to be the highest principles of all. And as for his place in history, I think there is a good argument for rooting the Glorious Revolution in the Exclusion debates. Moreover, there is at least one modern historian who has argued that Locke's dissertations on government were first written, not as a retrospective justification of the events of 1688, but as Exclusionist tracts in defence of Shaftesbury.
Posted by Anastasia F-B at 16:22