Clegg and Foggy; sharing the last of the wine 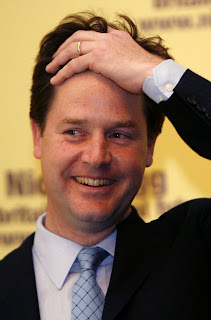 It’s quite delightful to see Nick Clegg, Corporal Clegg, come under some hard scrutiny by the right-wing press; under scrutiny by The Telegraph, The Mail and The Express. So much has come out since he ‘won’ the first round of the political X Factor; details of his expenses claims, of his past as a professional lobbyist, of his contempt for this country revealed by an article he wrote for The Guardian in 2002.

I always knew that Clegg was a political fraud and that his party is a positive danger to the interests of this country; one only has to read through their manifesto to reach that conclusion. The Guardian piece genuinely took me by surprise. I have no recollection of this making an impact at the time – I was still at school -, though I imagine it was ignored because, well, who then would have cared about such a colourless nonentity?

Surprise was quickly succeeded by anger; anger that this man could so downplay the role of his own country (is it his country?) in defeating the Nazis; anger that he could sing to a Continental gallery, saying that Germany was a vastly more prosperous nation and that “we need to be put back in our place.” I’m not quite sure where Clegg conceives ‘our place’ to be, other than under the heel of his beloved European super state.

It’s impossible to deny, of course, that Germany is a vastly more prosperous country. The reason for that is simple. Germany put all of its effort into rebuilding a shattered economy after the Second World War. Britain, on the other hand, whose economy was exhausted, if not ruined, set about under the socialists on a programme of ruinous welfare spending at the worst possible time. We have gone through a depressing cycle ever since: prosperity bequeathed by the Tories has always been destroyed by Labour profligacy.

Returning to Clegg, the treatment he has received at the hands of the press is frankly disgusting. It’s OK, it’s OK; I’ve not gone completely loopy; that’s the assessment of Peter Mandelson, Lord Rumba of Rio, who has denounced the ‘smear’ campaign against his political colleague…sorry, rival! I was getting confused there. 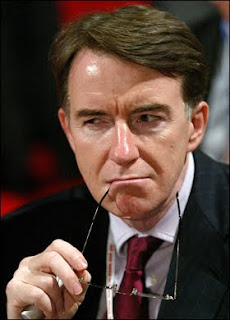 Gosh, what a hypocrite Rumba is! It was he, along with Alistair Campbell, who might be said to have invented the modern smear campaign, one based on the lowest forms misinformation and character assassination. His attempts to suggest that the Conservative Party was behind the Clegg stories, all based on fact, has been described by Sir Malcolm Rifkind as silly, juvenile and vintage Mandelson. “If Mandelson is your best friend”, he continued, “you’ve got serious problems.”

Rumba certainly sees Nick’s as his new best friend, there can be no mistake about that; he is Clegg’s Foggy. I can just see the two of them pottering around, spinning their own political fantasy world as the bottle rapidly empties, as the wine is all but drunk. They deserve one another; they are two of a kind.