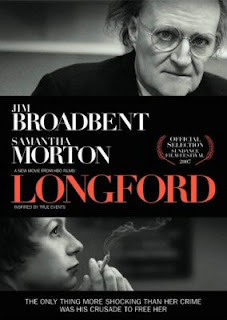 Longford, made for Channel 4 in England in 2006, is a television drama directed by Tom Hooper based on a script by Peter Morgan. It stars Jim Broadbent as Lord Longford, amongst other things a prison visitor and campaigner for liberal causes, and Samantha Morton as Myra Hindley, the infamous serial killer whom he befriends, campaigning for her release from prison.

Having recently finished a biography of Hindley I was immediately drawn to this movie. I’m so glad I saw it. Jim Broadbent is truly excellent as the campaigning peer, a performance for which he won a BAFTA award. He plays Longford very much as I imagine he was in life: a naïve, well-meaning but rather child-like individual, willing to take people at face value; willing to believe, following the tenets of his Catholic faith, that people are ultimately good.

Samantha Morton was also superb as Hindley, a manipulative and calculating woman, one who used Longford, as she used religion, towards her own cynical and self-serving ends. I thought that Andy Serkis was also excellent as a truly malevolent Ian Brady, with whom Hindley carried out the Moors murders in the 1960s, confronting Longford with truths that he clearly was not able to face.

I confess my reading of One of Your Own; the Life and Death of Myra Hindley left me with nothing more than a dislike, a mild contempt for the figure of Lord Longford as a silly, shallow and somewhat stupid old man; a man who collected killers as if he was collecting puppy dogs; a man who could not recognise Hindley for what she was.

But Broadbent’s portrayal gave deeper dimension to the man, to the importance religion played in forming his ideas and attitudes; it made me understand him just a little more, sympathise just a little more. It also showed just how vulnerable he was. Despite his age he really had no proper understanding of life and the traps it lays.

He was deceived by Hindley for many years, a deception finally made clear to him when she, under pressure from Brady, finally confesses her part in the murder of Pauline Reade and Keith Bennett. In perhaps the most telling scene of all we see Longford listen to a tape, sent to him anonymously, of the torture of Lesley Anne Downie, in which Hindley’s voice can be clearly heard, only her voice; the real tape is still too horrifying to broadcast. He listens with a look of despair. Still, in the end, his faith was only deepened by the test he had faced.

Longford is an excellent movie, one of the best TV productions I have seen.
Posted by Anastasia F-B at 15:14