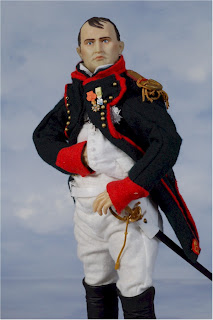 What was the most important factor in the downfall of Napoleon? Why, an impossible obsession. After the Battle of Trafalgar in 1805, realising that he would never be able to defeat England by a war at sea, he decided that he would have to resort to a new kind of war on land; an economic war.

By the Continental System he hoped to destroy British trade and manufacturing. But the Continental System was hopelessly ambitious. It required control, and absolute control, of the whole of Europe, from Lisbon to Moscow. It required all powers, all territories, all dependencies, all allies, no matter how reluctant, to fall in behind what was effectively a French economic dictatorship. Bit by bit the whole impossible project came apart. Portugal was the first to break rank, beginning the French tyrant's ruinous involvement in the Peninsula. Next to go was Russia, the ally of occasion.

To bring Tsar Alexander I back into line Napoleon broke the first rule of warfare-never march on Moscow. Russia's success in defeating French aggression also freed Austria and Prussia from the grip of the Continental System, enabling them all to join together in the War of the Sixth Coalition. Abandoned on almost all sides, Napoleon was overwhelmed at the Battle of the Nations.

How did his economic blockade affect the British? Hardly at all; for new markets were found in the Americas. Besides, smuggling into Europe was highly effective. More than that, Napoleon was forced to grant exceptions to his Berlin and Milan decrees, for the simple reason that he depended on British manufacturers for the supply of his army's boots! Contrary to Napoleon's intentions, moreover, such economic hardship as there was came in his own country, with food shortages, loss of business and high prices adding to his growing unpopularity. And that is how the mighty are fallen!
Posted by Anastasia F-B at 16:39