Fire up the Quattro 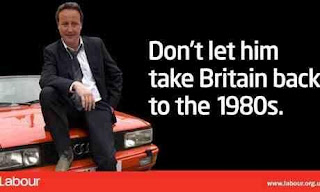 In a new propaganda poster Labour has depicted David Cameron as Gene Hunt, the TV detective played by Philip Glenister in Life on Mars and its sequel Ashes to Ashes. There he is, Dave himself, a tough, rakish-looking guy, wearing snakeskin boats and sitting on top of his Audi Quattro, the car made famous by the series, all beside a slogan saying Don’t let him take Britain back to the Eighties.

Labour really has lost the plot. First the howler over their national insurance jobs tax and now this, this wonderful gift to the Tory Party, a propagandist’s dream! The poster itself was designed by one Jacob Quagliozzi, a twenty-four year old Labour supporter from St Albans, who came out top in a competition organised by Saatchi and Saatchi, the party’s advertising agency. It’s being launched by David Miliband, that geek Banana Man himself, who says that it will be a “powerful reminder of the damage which the Tories did to Britain in the 80s”

What rot; it will be nothing of the kind! The Tories are so pleased by this altogether flattering image of their leader that they have produced the very same poster with a different slogan –Fire up the Quattro. It’s time for a change. Why, have they done this? Well, anyone who is familiar with the show – as Millie Banana clearly is not - will know exactly why.

Gene Hunt, you see, is a no-nonsense, tough-as-all-hell, get things done kind of cop as one can imagine. More than that, he is a walking, talking rebuttal to all forms of fashionable political correctness. He gets results by breaking the rules, cutting through all bureaucracy and established procedure. He is the kind of guy who may not go down all that well at an Islington dinner party, but if one were in a tight spot one could wish for no better companion. He is the type of guy who is completely out of place in New Labour Britain, completely out of place in the elf ‘n’ safety and 'yuman rights culture that has been thrust upon us from the dinner tables of Islington.

To give Cameron this image shows just how out of touch Labour is with the people of this country, just how out of touch it is with popular culture. It makes David look super cool, and who would have thought that possible! Conservative bloggers have responded with a Gordon Brown version, not at all flattering, showing him in some really naff clothes beside a really naff car, all under the caption Back to debt, decline and the 1970s with Gordon Brown. 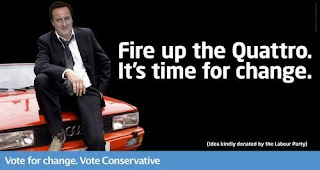 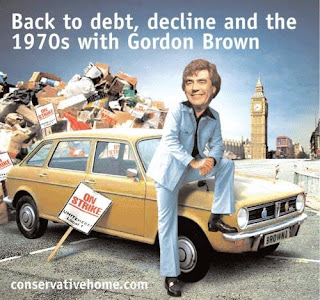