The Stones of Edinburgh 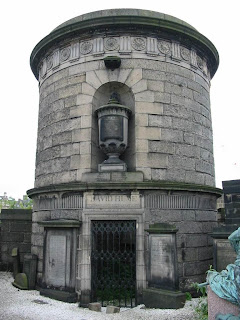 Edinburgh is a beautiful, romantic city. Along with Bath and York it’s among the three most attractive in the United Kingdom in my estimation. It’s the city of Miss Jean Brodie, who in The Prime of Miss Jean Brodie strolls with her girls, the crème de la crème, through the city’s historic Greyfriars Churchyard, the place where the National Covenant was signed in 1638, a document that was to engulf the whole of the British Isles in a great political tsunami.

I was saddened to discover that Greyfriars, a hugely evocative place, along with five other historic cemeteries in the city have been allowed to deteriorate so badly that they have now been put on World Monuments Fund’s latest watch list of the world’s hundred most endangered sites. The others are St. Cuthbert’s, Cannongate and the Old and New Calton burial grounds. Not only are the monuments crumbling but the grounds have also become the preferred haunts of drug addicts and drunks, deterring all but the most determined visitors. 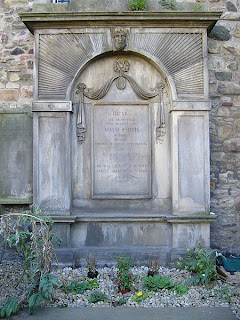 It’s so sad, because these graveyards contain some of the greatest figures of the Scottish Enlightenment; people like Adam Smith, the economist, who is to be found in Cannongate close to the bottom of the Royal Mile, and David Hume, the philosopher, who has a superb mausoleum designed by Robert Adam in the Old Calton Burial Ground. Thomas de Quincy, author of Confessions of an English Opium Eater, is also buried in Edinburgh, in the churchyard of Saint Cuthbert’s at the junction of Princes Street and Lothian Road.

The city guardians used to keep a far better watch over these places. In the wake of the Burke and Hare scandal of the late 1820s, in which two Irish immigrants dug up recently interred corpses to sell on to the medical faculty at the city’s university, round look-out towers were added to the walls of Saint Cuthbert’s. Now body-snatchers and miscreants of all kinds have a free range after dark, here and in the other graveyards. 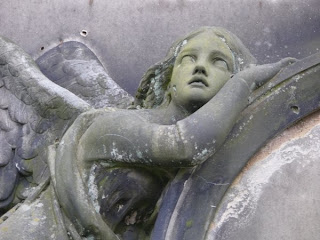 The council claims to have no money to look after these wonderful places properly. But when I was in Edinburgh last summer for the International Festival the main thoroughfare was being pulled apart for a massively expensive tram project that nobody I spoke to seemed to want. What a sad reflection not just on Edinburgh but the whole of Scotland, on a politically devolved Scotland, that it cannot look after some of its most enduring assets. Perhaps it’s time that De Quincy was repatriated. 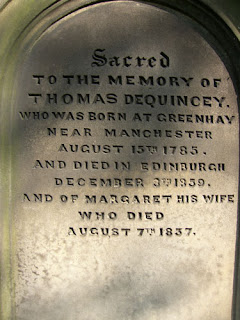