Crimes of the Commune 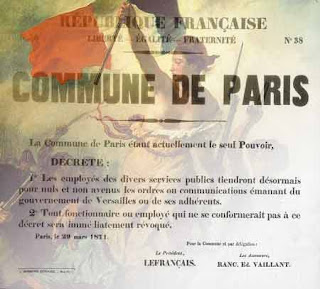 The Law of Hostages, introduced by the leaders of the 1871 Paris Commune, was a response to stories that the Versailles Army of Adolphe Thiers was executing captured Communards. It was actually modeled on the 1793 Law of Suspects, rather than the similarly named act passed by the Directory in 1799. The difference, I suppose, is that the Law of Suspects was passed in a time of national emergency, whereas the Law of Hostages was intended as an act of terror and intimidation, aimed against those who took a different political position from the Communards. The text of the act justifies the measures taken as follows;

...that the government of Versailles tramples under foot the rights of humanity as those of war; that it is guilty of horrors that have not even sullied the invaders of French territory...All persons accused of complicity with the government of Versailles shall be decreed accused and imprisoned...the jury will pronounce judgement within twenty-four hours; all the accused detained by the verdict of the jury shall be the hostages of the people of Paris; for every execution of a prisoner of war or a partisan of the legal government of the Commune will be followed by the execution of three times the number of hostages.

This decree became law on 6 April, 1871. Although passed by the Council of the Commune no action was taken for some weeks. But there were those like Raoul Rigault and other extremists, who took their inspiration from the likes of Gracchus Babeuf and Auguste Blanqui, who saw in the Law a way of advancing their own political and ideological ends. And high among their objectives was the destruction of the French Catholic Church. The Committee of General Security, a body set up by Rigault, and packed with his associates, duly ordered the arrest of Georges Darboy, Archbishop of Paris, and other clerics.

The whole thing was complete error of judgement; not only was Darboy far from being the kind of cleric so hated by the left (he had attacked the doctrine of Papal Infallibility) but his arrest played right into the hands of the Versailles press, which argued that the fight was simply against common criminals.

Darboy and the others were eventually shot, an act of political terrorism that served as a model for Lenin and all those who later attempted to walk in the path of the Commune
Posted by Anastasia F-B at 16:35