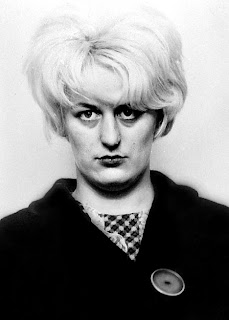 I’ve not long finished One of Your Own, The Life and Death of Myra Hindley by Carol Ann Lee. At close on four hundred pages it’s a detailed account of the life and crimes of one of the most infamous women in recent British history, but I read it over two days with complete fascination, though crime is not a subject that normally I am attracted to.

Hindley is different. There is something iconic about her, something that touches on the bigger issues, something over the nature and causes of evil itself that drew me irresistibly to this book. Lee tackles the subject with a scholarly sense of detachment, though she draws some pertinent and telling judgements at points.

It’s worth pointing out that she has also written extensively about the Holocaust, highly relevant for the simple reason that the mindset of Hindley was the same pathological mindset as people like Irma Grese or Elizabeth Volkenrath, both notorious concentration camp guards. It’s difficult for me to describe this with any precision; it’s evil, yes, but at its most banal, a combination of personal cruelty, maudlin self-pity and a total lack of sympathy for other human beings. During the period following her arrest along with Ian Brady for the murder of Edward Evans the only emotion Hindley ever showed was after she was told of the death of her dog.

Lee has a compelling relaxed style, writing with ease and considerable fluency. There were parts of her lucid account that I found so difficult, parts I almost skipped, especially the section dealing with the torment and murder of ten-year-old Lesley Ann Downie, which includes a transcript of the awful tape recording Brady and Hindley took.

Years later, when she was fighting her ruthless parole campaign, Hindley wrote to Ann West, Lesley’s mother, a letter which contains a particularly telling sentence;

I now want to say to you, and I implore you to believe me, because it is the truth, that your child was not physically tortured, as is widely believed.

Of this Lee says that Hindley, while trying to explain that Lesley was not mutilated prior to death, completely failed to grasp that the ordeal to which the little girl was subjected before her murder was precisely that – physical and psychological torture. Yes, what more need be said?

The part of the book that I found of particular interest was that dealing with Hindley’s years in prison prior to her death in November 2002, the time when she mounted a systematic campaign to convince people that she had changed, that she was no longer the same person, that she had rediscovered the Catholic faith of her youth. The whole thing seemed to me to be entirely fraudulent, as if she was not even beneath an attempt to deceive God himself in her cynical drive for freedom.

The one person she did not deceive was Diana Athill, a literary editor who was approached by Hindley’s supporters to work on a proposed autobiography. She insisted on meeting the woman before she would commit herself. The interviews took place but Athill declined to get involved, doubting the worth of the project as a means for Hindley to come to terms with the past. Afterwards she wrote:

When she did what she did she was not mad – as Brady was – and although she was young, she was an adult, and an intelligent one. It seems to me that there are strands of moral deformity which cannot be pardoned: that Stangl was right when, having faced the truth about himself, he said “I ought to be dead.”

Franz Stangl, for those who may not know, was a commandant of the Sobibor and Treblinka extermination camps.

There were plenty that Hindley did deceive, none more so than Frank Pakenham, the seventh earl of Longford, who was long active in her campaign for release. I have to say, though, I think she was particularly ill-served by this muddle-headed do-gooder (not a term I like, but it fits his character so.)

He raised her expectations in the early seventies, only a few years after she was sentenced to life imprisonment. It was because of him that her state of denial and self-deception deepened; because of him that she did not finally admit her part in the murder of Pauline Reade and Keith Bennett until the late 1980s. There seems to me to be an odd kind of similarity between the liberal and the psychopath. Like Hindley Longford had no interest in the victims of the Moors murders, no interest in the feelings of the families of the butchered children.

At the end of the book I felt nothing for the subject other than contempt and distaste. I struggle sometimes with the concept of evil, asking myself if it is something tangible, is it something, in other words, that has an objective existence beyond the individual choices we make? It might be easy to answer if I believed in Christian notions of good and evil, but I don’t. All I can say is that in the person of Myra Hindley evil took on an objective form, one that never went away.

Lee concludes her book by commenting on the obituary of Hindley in the Independent, where it was said that she had no ‘judgement’ – “But judgement was precisely what Myra Hindley had –in a sense, it is all any of us have – and she chose to use it with the most wicked intent.”

I ended, I confess, by crying for the family of Keith Bennett, whose remains, never discovered, still lie somewhere on those bleak, windswept Moors. 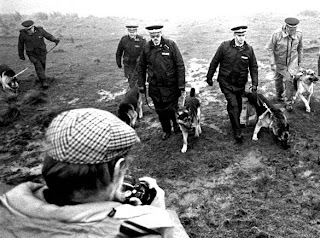 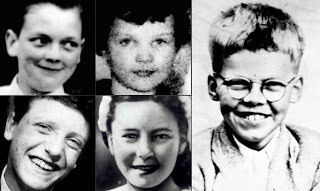