Who needs a crystal ball? 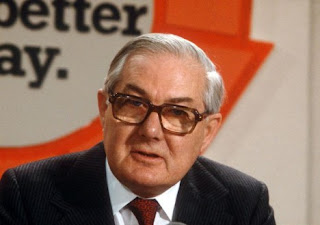 Does history repeat itself? Yes, of course it does. Labour governments always end in exactly the same way, leaving the country in a complete financial mess. So it is with Gordon Brown; so it was with Jim Callaghan, whose disastrous administration was removed from office in the election of 1979.

Newly released documents reveal just how bad things were in the Callaghan days, uncovering close contemporary parallels. It was the perfect Labour storm: double digit inflation, spiralling debts and a sinking pound, all against a background of union militancy and inflationary wage settlements. It was so bad that the US administration of President Gerald Ford was forced to mount a rescue package, warning Callaghan’s government that it had to live within its means.

So, at that time Britain had an economy much like that of present-day Greece; at that time it had a minority Labour government propped up by the Liberals, the predecessor to the Liberal Democrats, a portent, perhaps, of things to come.

The American documents are quite damning. A senior official at the State Department told the President that “the UK still does not appreciate the gravity of its situation, or lacks the will to deal with it.” This mismanagement was even perceived as a threat to the whole of the international monetary system, one that demanded extraordinary measures. Alan Greenspan, presidential advisor and financial guru, drew comparisons with New York City, which was then on the threshold of bankruptcy.

The country was only kept solvent after a £1.9 billion loan was arranged through the IMF with American help. At today’s values that amounts to £11 billion. Oh, but how modest it seems, nothing at all compared with the ocean of debt that Blair and Brown have accumulated since 1997. It remains open to question if even the vaults of the IMF are deep enough to compensate for the criminal fiscal irresponsibility of the present Labour government. Look at Greece; look at the future of Lib-Lab Britain.
Posted by Anastasia F-B at 16:11