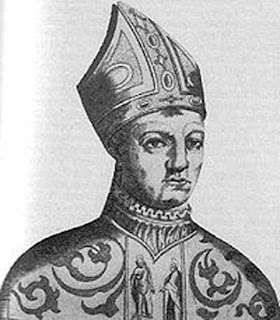 One of the history journals I take has a regular monthly feature on historical anniversaries. The piece that caught my eye in the latest issue is that on the election of John XXIII to the papacy; and, no, this is not the twentieth century John XXIII, rather a predecessor who has been rather air-brushed out of history by the Vatican as something of an embarrassment, the reason why John, one of the most popular titles in the papal succession, disappeared for several hundred years.

In 1378 the Catholic world was divided by the Great Schism, with one pope in Rome and another in Avignon, both claiming legitimacy. In an attempt to resolve the problem cardinals from the rival camps met at the Council of Pisa in 1409. Here the dominating influence was Baldassare Cossa, an able man but one with a notorious reputation. According to rumour he had had sexual relations with hundreds of women.

In the course of its deliberations the Council deposed both of the contending popes and replaced them with Alexander V as a unity candidate, but he was short-reigned, dying the following year. The Pisan camp replaced him on May 17, 1410 with Cossa, who took the title of John XXIII, but this just added to the overall confusion in the Catholic world, which now had three popes: John, Gregory XII in Rome and Benedict XIII in Avignon. In an attempt to cut the Gordian Knot, Sigismund, King of the Romans and heir to the Holy Roman Empire, compelled the new pope to convene the Council of Constance.

No sooner had the prelates met than John's reputation finally caught up with him. He was accused of a whole range of quite unbelievable offences, of which simony, a fairly widespread clerical practice, was probably the least malign! The others included piracy, incest, rape, sodomy and murder. It's almost certain that this was a deliberate attempt to ruin his standing, an attempt given verisimilitude by his past reputation, though gothic in its excesses. Cossa tried to play for time, promising to resign; but when he tried to withdraw his promise he was deposed by the Council. Of his rivals Pope Benedict, the last of the Avignon popes, was also deposed and excommunicated, while Pope Gregory in Rome simple abdicated. All were replaced in 1417 by Martin V.

Cossa was kept as a prisoner in Germany until such time as he accepted the new pope. He was eventually allowed to return to his native Italy, where he died in Florence in 1419, a city that had backed his papacy. In a mark of its former loyalty it gave him a magnificent tomb, designed by Donatello and Michelozzo. 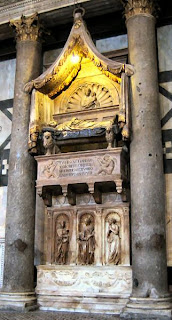 In 1958 Cardinal Roncalli was elected pope as John XXIII, a clear indication that his predecessor was not considered to be a true heir of Saint Peter.

I have one small additional point to make about Pope Benedict, whose name was Pedro de Luna. During the Great Schism, Scotland was one of the last countries to continue to recognise his authority. It was he who was responsibly for the endowment of Saint Andrew's, the country's first university. I'm told by friends who attend that it is still possible to see half-moons on some of the town's oldest stones, a reference to de Luna. I've never been to Saint Andrew's, so I can't vouch for this, and they may just be pulling my leg. Still, it's a jolly good story!
Posted by Anastasia F-B at 16:10