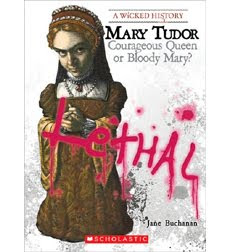 Considering her posthumous reputation Queen Mary Tudor, Bloody Mary, if you prefer, began her reign with a wide base of popular support, carried over from the reign of her brother, Edward VI. It’s easy to understand why. She represented stability and continuity in a period of transition and uncertainty. Protestantism was still a new and untried doctrine for the people of England.

One should always remember that the English Reformation came from above. It was from beginning to end a state-directed process, which carried most of the community, conservative and wedded to tradition, slowly and uncertainly. With the old rituals threatened there was no sure point of identity. Under Henry VIII, a schismatic rather than a heretic, people could adhere to a large degree to older Catholic practices. Under Edward VI, his son and successor, the whole thrust of Reformation took a far more Protestant direction.

In November 1547 Edward's first Parliament attacked many of the remaining traditional rituals. Henry's Act of the Six Articles was revoked, and the first steps taken towards the preparation of a new Book of Common Prayer, to replace the Catholic-inspired King's Book of 1539. As the traditional mass came under attack Mary increased the number of times that it was celebrated in her own household. Already popular as the heir-apparent, she became the focus for traditionalists and conservatives of all sorts. The more she was disapproved of at court, the more her standing increased with the people, who openly applauded her on her rides through London. There is little doubt that, on the death of Edward in 1553, Mary was carried to the throne on a great wave of popular and aristocratic approval, sweeping aside the machinations of Northumberland and the Protestant faction. Ironically, it was Mary's actions as Queen that was to give a new life to an unpopular cause.
Posted by Anastasia F-B at 16:39