Hating the quality of whiteness 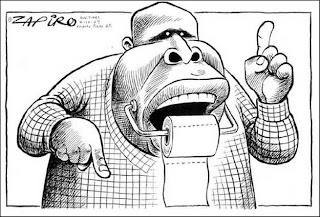 I wrote this for another site I belong to earlier this month. I’m adding it here for Jaycee.


Eugene Terre’Blanche, the murdered leader of the Afrikaner Weerstandsbeweing, was buried earlier this month amidst much Nazi-style gesturing and gnashing of teeth. Once again a tale of two nations seems to be unfolding, with the local black community looking on in an understandable mood of apprehension. But the baton has been passed on. The racist is dead; long live the racist. And the new racist is not white; he’s black – he’s Julius Malema.

I’ve mentioned before in previous blogs on South Africa that this man is the leader of the African National Congress’ youth wing, and one of the main political props of President Zuma. There was an interesting account of his background and outlook in The Daily Telegraph recently by Rian Malan, drawing attention, once again, to Malema’s trip to Mugabeland, where he sang Kill the Boer, that old ANC favourite from days gone by, feasting with his friend and picking up tips on how to run a successful decolonialisation programme.

Malema, as the report details, though relatively young and poorly educated, rose to prominence as a supporter of Jacob Zuma’s bid for power, intimidating and threatening violence against any opponents. A socialist and champion of the poor, very much in the model of Mugabe, his efforts were rewarded, as well-appointed houses, a fleet of cars and a Breitling watch fell into his hands, seemingly like manna from heaven.

Alas, it’s the old, old story, the story that has seen the Wabenzi, the big shots, advance across the rest of Africa in their limos; it’s a story of socialism for the many and wealth for the few, wealth for people like Mugabe and Malema. Their socialism is also accompanied by forms of racism, racism born of the need to create scapegoats, covers for their own venality and incompetence.

But Malema denies being a racist, denies hating white people. It’s just the quality of “whiteness” he hates, to use his own bizarre words. He was even more bizarre when he was in Harare, saying “They are so bright, so colourful, we refer to them as white people. Maybe their colour came as a result of exploiting our minerals and perhaps if some of us get opportunities in these minerals we can develop a nice colour like them.” I hope you can make sense of this gibberish, because I most certainly can’t!

He certainly has his eyes on those minerals, on the wealth of South Africa, having the support of a powerful faction within the ANC- perhaps even the President himself- for the same kind of ‘indigenisation’ that ruined Zimbabwe. This man is a dangerous, muddle-headed, greedy and unprincipled demagogue. If South Africa is to be destroyed, if the goose that lays the golden eggs is to be killed, he and his kind will be the cause, not Terre’Blanche and the ghosts of the past.
Posted by Anastasia F-B at 15:35