Heidegger and the Nazis 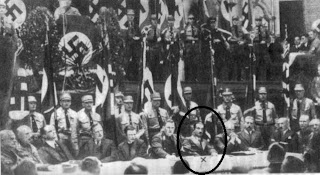 Martin Heidegger, author of Being and Time along with other philosophical works, was deeply compromised by his associations with the Nazis, particularly when he was elevated to the rectorship of Freiburg University, not the most successful period of his career. After the war he wrote The Rectorate 1933-34: Facts and Thoughts, his personal memoir of the period, a work of self-justification, which disguises as much as it reveals.

His rectorship at Freiburg collapsed for of a variety of reasons, including good old-fashioned departmental politics, vicious and treacherous as always, no matter what regime they operate under! Beyond that, one has to take into consideration Heidegger's own political naïveté and his gross over-estimation of his importance, both in the Nazi academic world and the broader scheme of things. One also has to take into account the nature of the Nazi system itself, and its underlying theory and practice. No matter what stress was placed upon the sublime, Nazism was shaped by mediocrity, not excellence. It was the world not of the Superman, but the Supermouse.

In his memoir, Heidegger maintains that his position at Freiburg was undermined by a conspiracy, involving his academic rivals and the district student leader, Dr Gustav Scheel, who later became Reich leader of students and university lecturers, and Gauleiter of Salzburg. Heidegger certainly had opponents at Freiburg, especially in the Law Faculty, though not all were doctrinaire Nazis. The matter, though, went far beyond the confines of the University.

In November 1933 the Nazis created their own structure of leadership within the whole university system, elevating Party mediocrities and time-servers to important positions in the Reich Association of German Universities. It was a clear declaration that Heidegger's bid for leadership of the German university system had failed, and that the Nazis had no real use for him, no matter his international stature. Abandoned by many of his more important colleagues at Freiburg, and snubbed by the government, Heidegger was in a personal, professional and political limbo.

There were also those in the Nazi movement, led by Erich Jaensch, his former colleague at the University of Marburg, who made every attempt to ensure that Heidegger would not be offered a leading position in Prussia or the Reich, because they did not wish him to be seen as 'the philosopher of National Socialism.' Jaensch compiled a memorandum arguing against a proposal that Heidegger be appointed head of the Prussian Academy of University Lecturers. It would be against all reason, he wrote;

...if what is possibly the most important post in the intellectual life of the nation in the weeks and months ahead were to be filled by one of the biggest scatterbrains and most eccentric cranks we have in our university system: a man about whom men who are perfectly rational, intelligent and loyal to the new state argue among themselves as to which side of the dividing line between sanity and mental illness he is on.

And this on one of the best philosophical minds Germany produced in the whole of the twentieth century! Against this background it is no great surprise that his rectorship failed. He finally resigned in April 1934, not February, as he says in Facts and Thoughts.
Posted by Anastasia F-B at 16:00