A battle too far 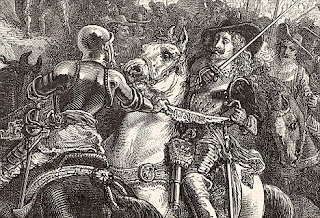 Why did King Charles decide to fight at Naseby when the odds were so heavily against the Royalists? Sadly for him, it was not just another battle but the great defining moment of the First Civil War. It blooded the recently formed New Model Army, and gave it a taste for victory it was never to lose. Charles had effectively handed his enemies the one great opportunity that they needed. Defeat was all the more tragic because the campaign had opened with such promise for the Royalist cause.

They had taken the Parliamentary stronghold of Leicester, just as Sir Thomas Fairfax, commander-in-chief of the New Model Army, was forced to abandon the siege of Oxford, the King's headquarters. It had not been Charles' original intention to face Fairfax in battle. Rather, as the enemy approached his camp at Market Harborough on the evening of 13 June, he was intending to withdraw to the north and join up with the garrison at Newark. At the last moment he changed his mind, after his scouts reported that Fairfax was at Naseby. Why? The simple answer is that we do not know for certain.

According the account set down later by Clarendon in his History of the Great Rebellion, a council of war was held in the early hours of 14 June, at which Prince Rupert, an able soldier and the King's best commander, urged that the withdrawal continue. This was opposed by Lord Digby and Jack Ashburnham, Charles' chief civilian advisers, who argued that such a move would be dishonourable and demoralising. Charles agreed and overruled Rupert. But Clarendon, writing in 1671, was drawing on an earlier account by Sir Edward Walker, who was not at the meeting and would appear to have been drawing purely on stories that only began to circulate after the defeat. Digby himself, the chief villain of the occasion, was to deny that any such meeting ever took place.

It seems likely that the story of divided counsels was invented as a 'settling of accounts', devised with the specific intention of passing the blame on to the 'politicians', thus exempting both Charles and Rupert. But it is far more likely, drawing on evidence of previous debates in the royal council, that the decision to fight was theirs and theirs alone. They may have believed that they had the initiative; they may not have known that Fairfax's force outnumbered their own by some 5000 men; they may have believed that New Model Army, as yet untested in open battle, was made up of many green troops. We simply do not know. It was a blunder; we know that much
Posted by Anastasia F-B at 16:06