Sigmund Freud, a Fraud and a Fascist 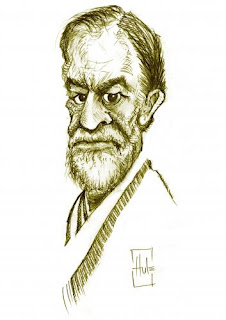 Marx still haunts us to a degree but I rather thought few people took Freud seriously these days. Not so; the French do. A major battle has broken out after Michael Onfray, a philosopher and author, weighed into the old fellow and his legacy, describing him as a liar, a misogynist, a hater of homosexuals and an anti-Semite! More than that, he says he was a fraud who failed to cure a single patient, even the famous Anna O, one of the core cases in the evolution of psychoanalysis.

Honestly, there are ways of doing these things with more decorum and less passion, but the French do like a good old-fashioned intellectual punch-up! Onfray’s onslaught comes in his latest book, Twilight of an Idol, the Freudian Fabrication. So far as he is concerned psychoanalysis is the last untouchable religion, revered by stars and footballers. “Who else, he asks, “would still have the time to pay in cash to lie on a couch twice a week before some guy who’s half asleep?”

Well, yes, he does have a point, even if he does sound just a little hysterical. But Monsieur Onfray does not stop there, oh no; Freud, you see was not just a fraud he was also a fascist! I can’t stop giggling as I write this; the whole thing is just so terribly droll. I can just picture the author out of control, unmanning himself in words.

Most people will know, I’m sure, that Freud was himself Jewish and had to flee from his native Austria after the Nazi Anschluss in 1938. The fascist accusation seemingly comes from the fact that he dedicated a book to Mussolini, though the report I read in The Daily Telegraph does not make it clear if the accusation of anti-Semitism is reducible to the same reference. If so, it really does need saying that fascism and anti-Semitism were never coterminous; and if Winston Churchill could at one time admire Mussolini then it would seem to be wrong to read too much into Freud’s dedication.

French analysts and admirers of Freud, rather than ignoring this provocation, and thus starving their enemy of free publicity, have mounted a vigorous counter-attack. In Le Monde Elisabeth Roudinesco describes the book as “a rag stuffed full of errors and shot through with rumours.” Is this, I wonder, a unique Gallic talent, stuffing rags and shooting them through with rumours? She goes on to say, in relation to the fascist accusation, that Onfray has rehabilitated the ‘pagan theses’ of the French extreme right. What are these ‘pagan theses’? I demand answers!

The odd thing is Onfray, a militant atheist and all round oddball, has written that there is no philosophy without self-psychoanalysis. Does, he, I wonder, lie on couch speaking to himself? Is the part of him that listens to the part of him that speaks half-asleep? Does he have a beard? If psychoanalysis is fraudulent is he not equally fraudulent, both for speaking to himself and listening to himself, even if half asleep? Overblown, overripe, self-deluding and silly, that much would seem to be obvious. What larks! :-))
Posted by Anastasia F-B at 15:30