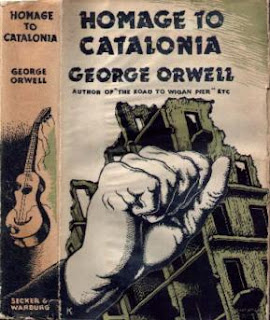 Homage to Catalonia is George Orwell's account of his experiences as a volunteer on the republican side during the Spanish Civil War. But it's not just another memoir. No, it's far more. For it marks a decisive stage in his progress as a writer and a thinker. Indeed, if one wanted to understand the roots behind the major themes in both Animal Farm and Nineteen Eighty-Four this book is essential reading.

Orwell, who had developed a general but rather unfocused sympathy for socialism, came to Spain to fight against 'fascism' without any particular idea of what he was fighting for. Like the majority of the foreign volunteers he was likely to have ended up serving with the International Brigades, controlled by the communists and ultimately directed by the Comintern in Moscow. But he did not. Quite by chance he enrolled in the militia of the Partido Obrero Unificación Marxista or POUM, a local Marxist and anti-Stalinist movement set up by one Andrés Nin, a former associate of Leon Trotsky. Yes, it was by chance, but politically and intellectually it was a decisive step in turning Eric Blair, the author's real name, into the mature George Orwell.

The Spanish Civil War was a struggle between the left and the right, between progress and reaction, between enlightenment and oppression. Well, no, it was far more complex than that. In 1937 on the republican side the struggle had become a war within a war, as Stalin decided to suppress all of the non-communist factions on the side of the government. This was the time of the Great Purge, of the Moscow Show Trails and the general attack on all 'Trotsky Fascists'. This was a time when every weapon was used in a campaign of disinformation, one based on the grossest abuse of language by the communist and socialist left, one based on the systematic rewriting of history. After all, he who controls the past controls the future.

Orwell, who had been serving on the Catalan front, returned to Barcelona in May of 1937. There he discovered that the free and comradely atmosphere that he had encountered when he first came to Spain had changed utterly. He was to be caught up in some extraordinary events now known as the Barcelona May Days, in which one left-wing faction fought against another left-wing faction. In the communist controlled press the POUM was denounced as 'fascist plotters'. With agents of the NKVD, the Soviet secret police at work, Nin was arrested along with many others, and subsequently murdered in custody. Orwell himself had to leave Spain in fear of his life.

Homage to Catalonia is a straightforward account of his experiences at the front and in Barcelona, packaged in some general political musings. The language, as one would expect from one of the great modern masters of English prose, is limpid. It's an honest book, too honest for some; Victor Gollancz, the left-wing publishing house for whom he had previously written, refused to accept his account of his Spanish experience even before a single word had been written. Why? Because he had served with the POUM, that's why. It should be remembered that Gollancz was not even controlled by the Communist Party. This attitude, this unwillingness to say anything critical of the official Soviet line, not stopping short of the Moscow Trials, was to be found right across much of the left-leaning and liberal opinion of the day. Of the British press Orwell was to write:

In Spain, for the first time, I saw newspaper reports which did not bear any relation to the facts, not even the relationship that is implied by an ordinary lie...I saw, in fact, history being written not in terms of what happened but of what ought to have happened according to various "party lines."