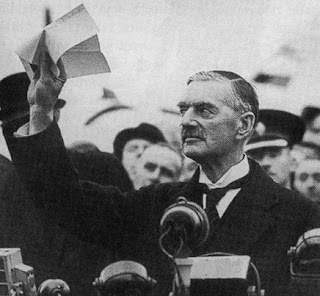 We have come a long way since the publication of Guilty Men, the self-satisfied 'I told you so' polemic of the 1940s. No serious historian would now consider dismissing Chamberlain and Appeasement in quite the same terms as the Cato conspirators. History is not created in looking back but in working forward. Appeasement has to be viewed from the perspective of 1919, not 1939.

Yes, it seems obvious from the standpoint of 1945, when history was torn up by the roots, that one had to be terribly deluded to attempt any form of reasonable compromise with people quite as monstrous as the Nazis; but at the time of the Munich Agreement this was not the common view. What was the alternative to Munich? Should a half-ready Britain and a half-hearted France have gone to war that could have had an outcome even more disastrous than that of 1940? For the Fall of France is unlikely to have been followed by victory over the skies of Britain.

By the 1930s most people in Britain had come to accept that Versailles had been an 'unfair' settlement: Appeasement thus has to be viewed in that context, a reversal and a remedy to the supposed errors of 1919, which denied the Germans the right of self-determination, granted to so many others. There was nothing to suggest in 1938 that Hitler wanted war for the sake of war, and every indication that international diplomacy could be pursued down normal channels.

But even while Chamberlain talked with the dictator he speeded up British rearmament, though such a move had been vigorously opposed by the strong domestic pacifism movement and the demand for disarmament, embraced by people like Michael Foot, one of the Guilty Men authors.

Appeasement could conceivably have continued after March 1939, when Hitler unilaterally occupied Bohemia and Moravia; at least this is the view promoted by A. J. P. Taylor in The Origins of the Second World War. But for Chamberlain it was a step too far, and the British guarantee to Poland followed.

Appeasement bought time, though this was not really Chamberlain's chief intention, which was to solve a problem, redress a wrong and secure the peace. Since the 1960s, and the controversy surrounding Taylor's book, scholars have made serious attempts to analyse the whole thrust of British diplomacy in the broadest possible terms, free of the glib judgements and moral outrage of the past. I would particularly commend The Realities Behind Diplomacy and The Rise and Fall of the Great Powers, both by Paul Kennedy.

Here we have three principle grounds for the rationality of Appeasement: Britain did not have enough skilled workers to produce rapid rearmament without endangering the whole process of economic recovery; military chiefs advised the politicians of the country's lack of preparedness for a major international conflict; and public opinion was consistently opposed to a strong stand against the dictators outwith the League of Nations. The whole rationale is simple enough: there was nothing to be gained for England economically, strategically or politically in fighting a Second World War, a conclusion fully borne out by what followed after 1945.

I have to say that my favourite treatment of the whole subject is Maurice Cowling's The Impact of Hitler, partisan and hugely entertaining! Cowling places the whole thing in a far broader explanatory context than had been attempted hitherto. In his estimation Appeasement was a policy that made perfect sense, because it was the only way to preserve the integrity of the Empire and British power in the world. It's an interesting perspective, though the chief emphasis shifts away from international relations towards domestic economic concerns.

For an alternative view one could do no better than refer to the work of David Dilks. Here Appeasement is essentially a consequence of the failure of the peace of 1919; or the failure, to be more precise, in securing the peace against a possible resurgence of German power. Chamberlain's action was thus informed by two things: recognition of German grievances, and an equal recognition that Britain lacked the economic and military resources for war. In Dilk's words he "hoped for the best and prepared for the worst." He talked, he compromised and he rearmed. In the final months before the war British spending on armaments reached a peacetime record. Chamberlain was no dupe; Appeasement made sense.