Herodias of the Witches 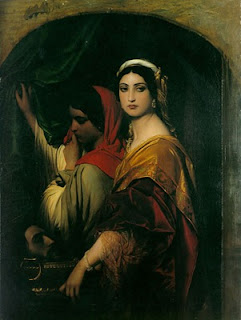 If Mary is the most significant of the good women in the New Testament Herodias, the granddaughter of Herod the great, and the wife of King Herod Antipas of Judea, surely has to be the most significant among the bad, second only to her daughter Salome. Salome was only an instrument; Herodias is the power. It was she who engineered the death of John the Baptist, using Salome in a particularly unscrupulous way to gain her ends. But for Herodias we would never have had the Dance of the Seven Veils! So there is no great surprise that she became the primary female villain for Christians. She was the Wicked Woman, by some accounts even reputed to be a demon.

The historical Herodias died sometime after 39AD, after she and her husband were banished to Gaul by the Emperor Caligula. But the Wicked Woman rose from the dead, taking shape as a new goddess in the pagan pantheon, possibly as a witch deity, though the links are far from clear. In any case a spirit bearing her name rose alongside Diana in Italy as one of the two figures most associated with witchcraft. The two are often paired together in leading the nocturnal Wild Hunt and in witch-trial transcripts. 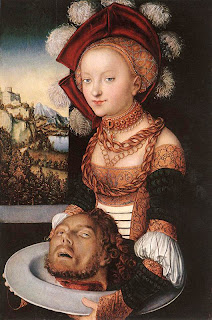 Ratherius, Bishop of Verona until his death ion 974 AD, complained that many saw Herodias as a queen, even a goddess, as though this was her reward, he remarks, for killing John the Baptist. In 936 he outlawed a movement which claimed that Herodias ruled one third of the world and was thus worthy of devotion. This was a time when she was also identified with Hecate, one of the greatest of the witch goddesses. There would also seem to me to be strong associations with Lilith, the first wife of Adam according to the Jewish apocrypha, and the great demon queen.

There are many Medieval legends about Herodias, though she is often confused and conflated with Salome. In one she is condemned to ride with the Wild Hunt until Judgement Day, always carrying with her the head of the Baptist. In Romania she manifests as the spirit Irodeasa. Here masked dancers, riding hobby-horses and carrying clubs and swords, undertook nine day rituals in her honour. In Russia she is to be found as a troop of female fever demons called Herod's daughters, numbering anything from nine up to seventy-seven spirits, the youngest named as Salome. Again the associations with Lilith are striking. 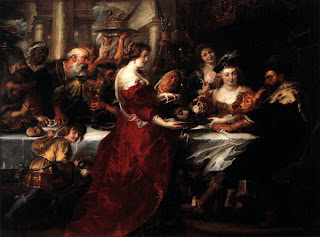