Richard II and the limits of majesty 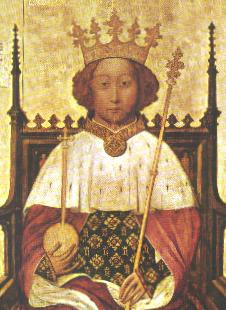 Richard II, son of the Black Prince, grandson and successor to Edward III, was an unusual kind of king for the day, one who clearly would have been better placed in the time of Tudor absolutism, or even in the twentieth century, as a dictatorial monarch in the fashion of, say, Alexander I of Yugoslavia or Carol II of Romania.

One can get a clear idea of how Richard’s power and majesty was perceived at the time-how, indeed, he liked it to be perceived-if one looks closely at The Wilton Diptych, where even the angels wear his personal White Hart badge. Does the arrogance of power come in any greater form? But, you see, Medieval monarchs were not meant to be dictators. They ruled by forms of consensus, not with the people at large, but with the senior nobility. For them the king, his majesty notwithstanding, occupied, in a sense, the same political position of the early Caesars, that of primus inter pares.

Richard’s problem was that alienated the one group of people on whom his power, his real power, ultimately depended. The state simply did not exist in the modern sense, and Richard had no standing army or dedicated service with which to enforce his will. Even the strongest of Medieval kings were careful to ensure that aristocracy were kept loyal to the crown; by success in war, by grants of land, or by a combination of both. Richard was not successful in war. But far more seriously, he showed that, in the exercise of pure royal power, he was prepared to dispossess even the most powerful; and none were more powerful than Henry Bolingbroke. 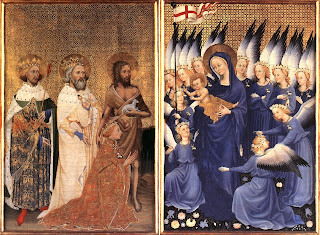 Richard's decision to exile his cousin and then seize the Lancastrian estates on the death of John of Gaunt, Bolingbroke’s father, certainly ended the power of a potential rival to the crown. It was a bold move, but one that alarmed the other nobles, fearful that their own lands and inheritance could be taken in such an arbitrary and vindictive manner. When Bolingbroke returned to England, it was not, so he claimed, to take the crown, but to recover what was rightfully his, a cause that could easily command wide support among his fellow peers. Against this background Richard’s power simply crumbled. He lost power; he lost majesty; he lost credibility. He could no longer be king.
Posted by Anastasia F-B at 15:15