The Ghosts of Katyn Wood 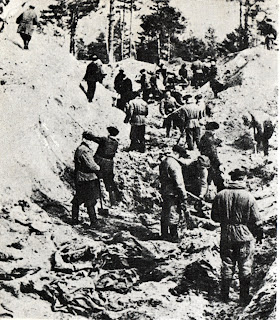 Documents have finally been published that prove, once and for all, that Stalin personally authorised the murder of thousands of captured Polish officers at Katyn Wood and other places in 1940. I never had any doubt about this; I've read biographies of the man and know that nothing of importance in the old Soviet state ever happened without his authorisation. I also know that he personally signed many death lists during the Great Purge.

Still, this is an important development, not for a select band of scholars, who have long had access to the Russian archives, but for the public at large, for Poles in particular. For many years after the massacres the Soviet state was in denial about what happened, blaming the Germans, though they gave the lie to this assertion by refusing to allow the matter to be raised at the Nuremberg Trials of the major Nazi war criminals. Although a new openness began after the collapse of communism it has taken time for the full truth to come out, bound up as the question has been with issues of national pride. It proves once and for all that the assertion of people like Vevgeny Dzhugashvili, the tyrant's grandson, that he was somehow not personally responsible, is disingenuous in the extreme.

It comes at just the right moment, not long after the death of the Polish president, killed on his way to a commemorative ceremony. It's a welcome gesture by Dimitry Medvedev, the Russian president. One can only hope this is the beginning of a better understanding between the two nations, nations that have a long history of mutual animosity despite a common racial identity.

By any definition Katyn was a terrible crime, the massacre of close on 22,000 unarmed prisoners by the agents of the NKVD, the Soviet state security apparatus, the predecessor of the present MGB. One of the documents made public is a note by Lavrenty Beria, the head of the NKVD and one of Stalin's vilest henchmen, whom he once referred to in a joking mood as 'our Himmler.' In this he proposes that the Poles, who included priests, writers, professors and aristocrats as well as military officers, should all be shot. This particular document, which carries Stalin’s signature and a red 'top secret' stamp, is dated March 1940. There are other documents, coming after the Stalin era, showing that the Soviets were determined to keep the matter secret.

Responsibility was finally admitted by Mikhail Gorbachev only in 1990, when he expressed his 'profound regret', a bold gesture by the one decent man the communist state ever produced. But for history, for future generations, tangible proof is in every way better than expressions of regret, no matter how sincere. The ghosts of Kaytn can finally rest.
Posted by Anastasia F-B at 15:43