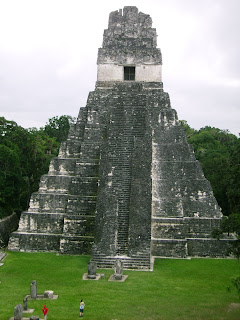 In one of the earliest surviving Anglo-Saxon poems the author wanders among ruins of Roman Bath, finding it difficult to conceive that these structures could have been left behind by ordinary human beings, believing some greater force or ‘weird’ must have been involved. I had exactly the same feeling wandering around the Mayan remains at Tikal in Guatemala!

I visited Guatemala just before going up to university, part of my gap-year globe trotting. Actually, I only went quite by chance. I was in Mexico where I met a couple from the States, people of Guatemalan descent, on an excursion to the pre-Aztec remains at Teotihuacan, while we were resting near the top of the Pyramid of the Moon, to be exact!

We lunched afterwards and I explained that I really would have liked to see the Mayan sites, but that the advice of my government was that Guatemala was a dangerous place to visit because of the levels of organised crime. On their assurance that this hardly ever affected tourists, coupled with some very sound travel tips, I decided to take the risk. I’m so glad I did.

Teotihuacan and the other Mesoamerican sites I visited in Mexico certainly impressed me but Tikal is something else all together, those fantastic pyramids emerging here and there from the canopy of the surrounding forest, so out of this world, so futuristic-looking that George Lucas even used them for a setting in the Star Wars movies. Tikal in reality was the capital of one of the most powerful of the ancient Mayan kingdoms, a place that reached its height during the Mesoamerican classical period between 200 and 900AD. 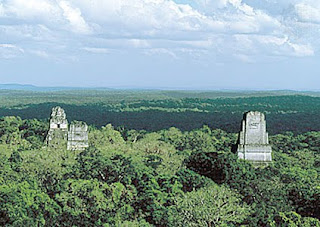 I could have spent days exploring these magnificent structures, wandering in the footsteps of the Maya, but I only had a few hours before flying back to Guatemala City in the late afternoon. I hope to go back later this year, not just to spend more time here but also to visit the Mayan sites in Honduras.

Oh, one small snippet of quite irrelevant information I have to add here. Mel Gibson came to Tikal when shooting some of the scenes for Apocalypto. While waiting for our flight we talked with the lady who runs the airport bar. She pointed out a picture of herself standing beside him, obviously quite proud to be seen with a celebrity. What amused me was that she was quite small and Gibson only a head or so taller, which, by my estimation, makes him smaller than me. He looks so big on the screen! 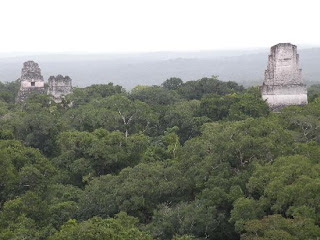 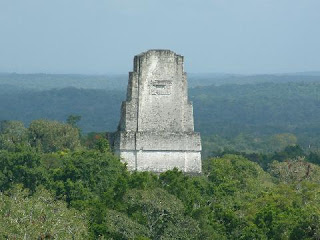