Of Whigs and Tories 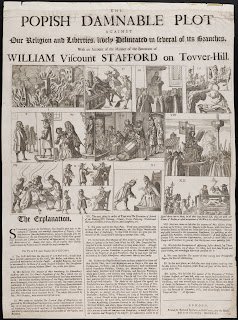 In October 1678 a magistrate by the name of Edmund Berry Godfrey was murdered. The crime, never solved, was to turn into one of the most explosive in English history. Godfrey, a figure of little real significance in himself, had been delegated by the government to investigate the accusations of one Titus Oates, a wholly disreputable character, that Catholics, a passive and quiescent minority in England, were conspiring to assassinate Charles II. But the accusations, seemingly given substance by the murder of Godfrey, served a political purpose; served to point to the fact that James, duke of York, the king's brother and heir, was himself a Catholic. Soon he became, in the eyes of some, the principal beneficiary of the alleged scheme to murder his brother. It was the beginning of a wave of political hysteria now known as the Popish Plot.

James himself, a stiff and unapproachable figure, had many political enemies, chief among whom was Anthony Ashley Cooper, the first earl of Shaftesbury, a brilliant if rather unprincipled figure. A friend of John Locke, the philosopher, he was quite capable of changing political colours with ease. During the Civil War between the King’s father and Parliament he had initially been a supporter of the royalists before switching to the parliamentary side, and then back to the royalists before the restoration of the monarchy in 1660. Opportunist he may have been but he was one of the most skilful parliamentarians in English history, one who continued to be distrustful of royal absolutism. His politics were given an added piquancy by the fact that he loathed James, perceiving him, and his faith, as a danger to the liberties of England.

Catholicism, though long of little real political consequence in England, was associated with Continental absolutism, personified above all in the figure of Louis XIV, the king's cousin. The fact that James had converted to Catholicism was seen by many as a direct threat to the future security and integrity of England. As the accusations revealed by Oates gained ground, in Parliament a faction around Shaftesbury began to agitate for the exclusion of James from the succession, to be replaced by James, duke of Monmouth, Charles' illegitimate but Protestant son.

This faction, loosely defined, but containing some supporters of the Parliamentary side during the Civil War, was initially referred to as the ‘Country Party’, meaning that they represented the interests of the nation as a whole, as opposed to the 'Court Party' behind the king. As a badge of their unity Shaftesbury and his supporters adopted a green ribbon, and were subsequently organised in the Green Ribbon Club, which had regular meetings at the King's Head Tavern in London.

But their enemies, those who supported James and the legitimate succession, had another name for them - the Whigs. This label was new to English politics, an import from Scotland, where it was used to refer to extreme Presbyterians, disruptive, seditious and rebellious dissidents. In Parliament the opponents of Shaftesbury, headed by George Saville, marquis of Halifax, were accorded an equally derogatory label - they were described as Tories, after a group of Irish brigands. Both terms were to stick, and although intended as insults adopted by the groups in question. It was the beginning of English party politics and a two-sided contest that was to dominate Parliament right up to the twentieth century, by which time the Whigs had become the Liberals and the Tories the Conservatives.

It should be stressed, though, that in the context of the seventeenth century 'party' was a very loose term with none of its contemporary associations. There was no membership, there was no authority and there was no ideological discipline; it was merely a collection of like-minded individuals. The Whigs, though strong in Parliament, had no real organisational coherence. Although they could win elections they made little progress against the obduracy of the court, as Charles, while bending with the wind, even exiling his brother for a time, refused to concede to their principal demand. In the end, after the dissolution of the Oxford Parliament of 1681, the high-water mark of the Exclusion Crisis, the Whigs simply imploded. But an idea, an attitude and a style had entered the politics of the land, one that would never go away.
Posted by Anastasia F-B at 15:30