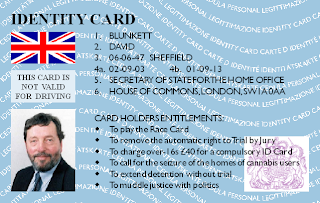 The issue of identity cards, once one of the flagship policies of our present marshmallow government, has rather sunk without trace, there but not there, if you take my meaning. Any sensible politician – and there are few of those in the Labour ranks – would have cast their eyes over the past history of identity cards in Britain; and the past history was anything but good.

Identity cards were introduced in the United Kingdom in September 1939. This was the second such scheme in British history, following a largely unsuccessful experiment during the First World War. Given the long British attachment to civil liberties the scheme was highly unpopular, though accepted in the light of the prevailing national emergency. It's possible to take a small measure of how the national identity scheme was received from remarks by the historian A J P Taylor in his English History, 1914-1945, where he describes the whole thing as an 'indignity' and talks of the Home Guard 'harassing' people for their cards.

After the war the government of Clement Atlee decided to continue the scheme in the face of the Cold War and the perceived Soviet threat, though it grew ever less popular. In the mind of the public it was more and more associated with bureaucratic interference and regulation, reflected, most particularly, in the 1949 Passport to Pimlico, one of the comedy movies made by the Ealing Studios in London.

Identity Cards also became the subject of a celebrated civil liberties case in 1950, when Clarence Henry Willcock, a member of the Liberal Party, refused to produce his after being stopped by the police. During his subsequent trail he argued that identity cards had no place in peace time, a defence rejected by the magistrate’s court. In his subsequent appeal, Willcock vs. Muckle, the judgment of the lower court was upheld, though in summing up Lord Goddard more or less accepted his defence;

This Act was passed for security purposes, and not for the purposes for which, apparently, it is now sought to be used. To use Acts of Parliament, passed for particular purposes during war, in times when the war is past, except that technically a state of war exists, tends to turn law-abiding subjects into lawbreakers, which is a most undesirable state of affairs. Further, in this country we have always prided ourselves on the good feeling that exists between the police and the public and such action tends to make the people resentful of the acts of the police and inclines them to obstruct the police instead of to assist them.

Protest reached Parliament, where the Conservative and Liberal peers voiced their anger over what they saw as 'Socialist card-indexing'. After the defeat of the Labour Government in the General Election of October 1951 the incoming Conservative administration of Winston Churchill was pledged to get rid of the scheme, “to set the people free”, in the words of one minister. This was a popular move, adopted against the wishes of the police and the security services, though the decision to repeal the 1939 legislation was, in significant part, driven by the need for economies. By 1952 national Registration was costing £500,000 per annum, a huge sum for the day, and required 1500 civil servants to administer it. Some things are best left in the dark.
Posted by Anastasia F-B at 15:51