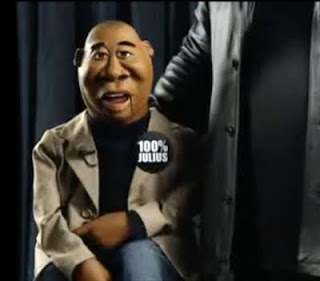 There is something rotten in the state of South Africa, something I hinted at in a previous blog (What have the Romans ever done for us?)Now Eugene Terre’Blanche, a white farmer and the leader of the Afrikaner Weerstandsbeweging (AWB), has been murdered. I confess I had never heard of this man, or his movement, until I read the reports following his death. I find it difficult to believe that the majority of Afrikaners, no matter how unhappy with the government of the African National Congress, could have in any way have identified with his clonish and clownish Nazi-style party; even the flag it uses is derivative.

The death of this man is just part of the wider fragmentation of the so-called Rainbow Nation, which shows every sign of degenerating still further under the mismanagement of the ANC. If the white racist fringe had Terre’Blanche then the black racist fringe (is it a fringe?) has Julius Malema, the leader of the ANC’s youth wing, a friend of President Zuma and a great admirer of Robert Mugabe, that inspiration to all progressive Africans.

Terre’Blanche is just another statistic, one of more than three thousand white farmers who have been murdered since 1994. This would, at least on the face of it, appear to be something pleasing to Malema, as he resurrected Kill the Boer, Kill the Farmer, a favoured ANC song from apartheid days. He sang it on his recent visit to Zimbabwe, though he has been banned from doing so in South Africa itself by court order. But still he is indulged by Jacob Zuma. Now this is where the rottenness goes really deep.

Here is part of what I wrote in my previous piece;

…look beyond the villas of the ANC cadres, look beyond the houses and the cars, and one might easily conclude that there is no need for a new apartheid, for the simple reason that the old apartheid is still very much in place; that the new bosses look very much like the old bosses, except for the colour of their skin; that oppression and poverty feel like oppression and poverty no matter if the ruler is white or black. In many places people still live in squalid townships where the government fails to deliver on the most basic services, including clean water, sanitation and power.

It’s actually getting worse; for in preparation for the football world cup many people are being forcibly moved from their homes and dumped elsewhere, treated very much as they were by the old apartheid state; treated very much in the same fashion as the aliens in the movie District 9. One woman said that “They took people from the streets because they don't want them in the city for the World Cup. Now we are living in a concentration camp.”

Yes, the old resentments are building up again. The obvious target should be the corrupt cadres of the ANC, who are more than content to leave their brothers and sisters in the dust. But there are other ways to release the tensions. Why not raise some old specters, why not sing Kill the Boer? I’m not suggesting that this incitement to racial hatred is a strategy actively adopted by the ANC – I simply don’t have enough evidence- , though there are those in South Africa who are prepared to claim that the party is using race to divert attention from its own failings. And as long as Zuma refuses to reign in Malema, so long as he fails to condemn songs like Kill the Boer who can blame them. Not I.