The Party of the Long Knives 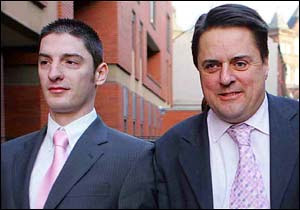 The British National Party or BNP, for those who don’t know it, stands on the fringes of British politics. Many of its members and much of its hierarchy, including Nick Griffin, the party chairman, have a Nazi and racist past, something that they rather wish that voters would forget, at least the Nazi part.

Under Griffin the party has been attempting to go ‘mainstream’, persuading enough people to vote for them in last year’s Euro election to get Griffin and Andrew Brons elected as members of the European Parliament. The movement is said to be right-wing, though a good part of its programme could easily have been lifted from old Labour Party manifestos, which I feel sure explains their appeal among working-class voters, that and the racism.

No matter what colour this movement gives itself of one thing I am certain: it is largely made up of eccentrics and oddballs, people with a grudge, people who would be naturally attracted to one kind of extreme or another as a reflection of some deep-rooted disaffection or personal alienation.

Attempts to give the party a less extreme hue will always be defeated by the likes Mark Collett, the BNP’s erstwhile chief publicist, who is alleged to have been involved in a plot to kill Griffin. Now I know that the metaphorical knives are always out in the mainstream parties; but in the BNP the knives would appear to be literally that!

Collett, once tiped as a future leader of the party, is really no more than a symptom of a deeper malaise. I would say of the BNP as was once said of Hitler’s SA Brownshirts – they are no more than a collection of desperados in search of a pension. Collett had personal ambitions; ambitions to make a career out of the BNP; ambitions to earn the “enormous salary” (his words) of an MEP; ambitions to own a BMW. But in the end, and despite his status, he wasn’t even offered a winnable council seat, as David Modell, who once made a documentary about him, said recently in The Spectator.

The Untergang (sorry; I couldn’t resist that!) seems to have come when Griffin entered into a partnership with James Dawson, a Belfast-based businessman and leader of UK Life League, a militant anti-abortion group. Dawson, who has a network of companies combining political fundraising and publishing, persuaded Griffin to move much of his party’s administration to Northern Ireland, thereby undercutting Collett. This was the background against which his personal pitch at a Night of the Long Knives would appear to have been shaped.

Collett, now out on police bail pending further investigation, was due to contest the parliamentary seat of Sheffield Brightside, presently held by Labour’s David Blunkett, in the coming general election. Now he is nowhere, an isolated figure. The whole story is so bizarre, so unbelievable. Even so, it destroys the myth that the BNP is just another political party, a moderate non-violent organisation. It’s not; it never will be. Violence is part of its psychosis, part of its character.
Posted by Anastasia F-B at 15:52