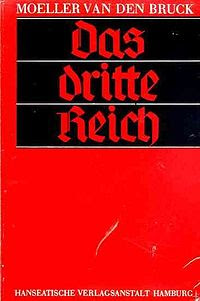 One of the more interesting men to emerge from the radical right in Germany after the First World War, Arthur Moeller van den Bruck created an 'ideal' for a disappointed nation, an ideal he expressed in Das Dritte Reich, published in 1923. It's an organic myth, the image of Germany's 'Third Rome'- there will be no other.

For Moeller, Germany's great misfortune lay in the political system created by the Weimar Republic, one of competitive parties and liberal ideologies. An admirer of Mussolini, he looks for a strong leader. His Reich is not so much state in the sense that term is usually understood: it is the ideal condition, the only way in which the scattered German people can achieve a common purpose and destiny. But he does not look for the limited state, the Second Reich fashioned by Bismarck;

The weak Weimar Republic, he argues, will have to be replaced by a new revolution, a revolution from the right. He looks also for a new political movement that will embrace both socialism and nationalism, a unique form of German Fascism. He takes all of his philosophical cues from the work of Nietzsche “who stands at the opposite pole of thought from Marx.” The one contemporary politician he admires above all others is Benito Mussolini.

The temptation, of course, is to see this difficult little book as an advocate for what was to come; but as always the gap between the ideal vision and the historical truth is virtually unbridgeable. On the eve of publication Moeller inserted a preface, in which he wrote that "The Third Reich is a philosophical idea not for this but for the next world. Germany might perish because of the Third Reich dream."

He believes Germany needs a Superman in the fashion described by Nietzsche, but that Superman is not Adolf Hitler. Soon after the collapse of the Munich Putsch he wrote;

There are many things that can be said against Hitler, and I have sometimes said them. But one thing you have to give him credit for: he is a fanatic for Germany. But he is wrecked by his proletarian primitive ways. He does not know how to give an intellectual basis to his Nazi party. Hitler is all passion, but lacks sense or proportion. A heroic tenor, not a hero.

Hitler, in other words, was not Mussolini. These were the last words he ever wrote before his suicide in 1925.

I might have recommended The Man who Invented the Third Reich, Stan Lauryssens' 'biography' of Moeller van den Bruck. I won't, because it's terrible. 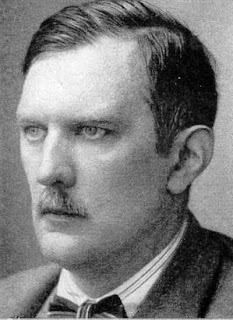