A Tale of a Leg 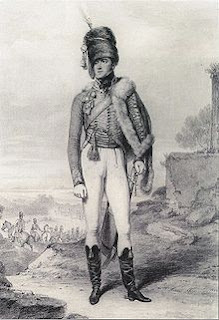 One of the best known casualties at the Battle of Waterloo was the leg of Henry Paget, Lord Uxbridge! After receiving a wound which took off part of his leg, Uxbridge, one of Wellington’s senior commanders, was taken to his headquarters, a house owned by one Monsieur Hyacinthe Joseph-Marie Paris, who was still in residence. There what was left of his leg was removed by the surgeons, without antiseptic or anaesthetics. Uxbridge, true to his nature, remained stoical and composed, his only comment through the dreadful procedure being "The knives appear somewhat blunt."

Paris asked if he might bury the leg in his garden, later turning the place into a kind of shrine come theme park. Visitors were first taken to see the bloody chair upon which Uxbridge sat during the amputation, before being escorted into the garden, where the leg had its very own 'tombstone', inscribed as follows:

Here lies the leg of the illustrious, brave and valliant Lord Uxbridge, Lieutenant General of His Britannic Majesty, Commander in Chief of the English, Belgian and Dutch Cavalry, wounded on the 18 June 1815 at the memorable battle of Waterloo, who, by his heroism, assisted in the triumph of the cause of mankind, gloriously decided by the resounding victory of that day. 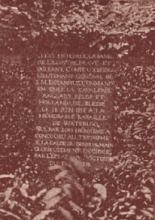 Some were impressed; others less so. Thomas Gaspey, a poet of sorts, recorded his own impressions in verse;

Here rests, and let no saucy knave
Presume to sneer and laugh,
To learn that mouldering in the grave
Is laid a British calf.
For he who writes these lines is sure
That those who read the whole,
Will find such a laugh were premature
For here too lies a sole.

And so on and so forth!

The leg, and the sole, attracted an amazing range of tourists from the very top drawer; from the King of Prussia to the Prince of Orange, European society of the very best. It was nice earner for Monsieur Paris and his descendents, all the way down to 1878, when it was the occasion for a minor diplomatic incident.

Uxbridge's son visited to find the bones, not buried, but on open display. On investigation by the Belgian Ambassador in London, it was discovered that they had been exposed in a storm which uprooted the willow tree beside which they were buried. The Ambassador demanded repatriation of the relics to England but the Paris family refused, instead offering to sell the bones to the Uxbridge family, who, not surprisingly, were enraged. At this point the Belgian Minister of Justice intervened, ordering the bones to be reburied.

But they were not reburied; they were kept hidden. In 1934, after the last Monsieur Paris died in Brussels, his widow found them in his study, along with documentation proving their provenance. Horrified by the thought of another scandal she dumped the lot in her central heating furnace!
Posted by Anastasia F-B at 16:51