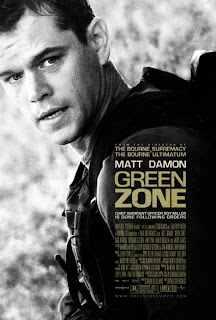 The Green Zone is the second movie I’ve seen this year set against the Iraq War, coming not long after The Hurt Locker. The latter was accomplished; the former breathless. It’s not bad in its attempts to make sense of the whole Iraq mess, turning a conspiracy theory into roller-coaster thriller!

The Green Zone, directed by Paul Greengrass stars Damon as Roy Millar, a warrant officer in the US Army Special Forces whose unit is charged with the search for those legendary and mythical weapons of mass destruction (WMDs) in the wake of the 2003 invasion of Iraq. Yes, indeed, mythical WMDs, because that’s the whole point of the movie: Millar’s search is continually fruitless. His unit takes casualties, though, in their empty task. In his frustration Millar questions the intelligence on which his quest is based. But he is told to keep quiet by his superiors, who insist that it is all good.

Behaving in a way that no officer would; behaving, though, in the way that Jason Bourne would, Millar sets off on his own quest to unravel the truth, a quest that leads to conflict with one Clark Poundhouse, played by Greg Kinnear, of Pentagon Special Intelligence. Puoundhouse, it seems to me, is clearly based on the character of Paul Bremer, the American diplomat who effectively ruled Iraq as a kind of viceroy after the invasion, a man who found chaos and created catastrophe!

Bit by bit the story becomes clear, especially after Millar makes contact with one General Al-Rawi, played by Yigal Naor, a senior officer in the old Iraqi army and an informant who goes by the code-name of ‘Magellan.’ Well, it turns out there were no WMDs, there hadn’t been since the First Gulf War, information that had been given to Poundstone, who hid it from his superiors to allow the invasion to go ahead anyway.

So, there you have it: the invasion of Iraq was based not on miscalculation but manipulation! The Green Zone is a reasonably competent war movie come political thriller with all sorts of adrenalin rushes scattered along the way. Just don’t take the message too seriously.