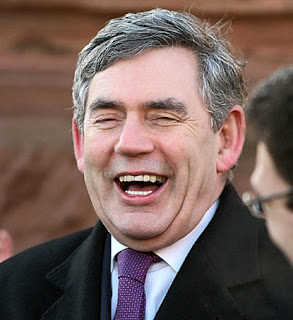 This is a letter that I had to write, one that I will never send and one that you are unlikely ever to read. It's an open letter because I think that some other people might be interested in what I have to say.

Anyway, I saw you on Wednesday evening on the news talking with Gordon Brown, and I read about you yesterday morning in the newspapers. I was particularly moved by the picture of you on the front cover of the Daily Telegraph, the one that was taken after you had been told that the Prime Minister had referred to you as a 'bigot' when he thought only his staff were listening. Like you I could not quite take things in at first, could not quite believe what was happening.

The wounded disbelief on your face almost made me cry; it certainly made me feel very emotional, feel something of the depth of your own sense of disbelief at the ugly callousness of this remark. I could feel your sense of betrayal, your bewilderment that you had been dismissed in such a fashion by an 'educated man', as you put it, who heads a party with whom you have identified all of your life.

You may very well think it presumptuous of me to write to you like this. We come from such different worlds. We have so little in common. You might think me arrogant, someone from a very privileged background who has an opinion on everything and is never reluctant to express her opinion. You are a life-long Labour supporter, and presumably have voted for the party many times. I have been a member of the Conservative Party since I was a teenager and so far have only voted once, in the general election of 2005. I come from a family with a long tradition of Conservative support, one with associations with some important people in the history of the party. I'm young, I'm arrogant, I do not understand why people, ordinary people like you, have ever voted Labour, a party which serves you so ill, a party which has served this country so ill. But, please let that pass; there are other things I want to talk about.

For me the look on your face will forever be the defining moment of this election campaign, not the television debates. It says so much, not just about how hurt you felt but about the man who hurt you, more, if anything, about him than about you. I've long believed that he has contempt for people like you, for the powerless, for the people on whom he depends. I read a book some weeks ago which detailed how he bullies his staff, the least powerful people around him. He is the kind of man who, when in difficulty, always blames others, never himself, always looks for scapegoats. He is the kind of man who, by repute, cannot make 'small talk', which I take to mean that he cannot converse in a normal way or relate to people with sympathy and understanding.

His meeting with you, by any reasonable definition, was unremarkable, one that left you feeling good. But not him. That you dared question him on the great issues of the day, on the deficit and on immigration; that you dared give expression to the fears of so many little people, unimportant people, made you a terrible woman, a 'bigot' in his eyes. You are not at fault; he is. He is the product of a political system that pretends to sympathise with little people but secretly despises them. He is a product of a system that pretends to represent people like you but consistently ignores them.

The worst part, the worst part of all, was when he came to your door to offer a hypocritical 'apology'. He had been found out, the enormity of his words had been played back to him; he could do no else. In your position I would have refused to see him, refused to allow him over the doorstep. But you are clearly a much more generous and forgiving person than I. I only feel anger and contempt, deepened when I saw him speaking to the media after he left your home, saying that he was a 'penitent sinner' with an altogether inappropriate and silly grin on his face. I think he is sorry alright, sorry that he was ever found out. There was no sincerity at all in his bogus and inadequate words.

Personally I would like people like you to vote Conservative, a party that has consistently raised prosperity just as Labour has lowered it. But this is not about politics; it’s not a plea for your vote. It's just to let you know that, for a brief moment, you became the voice of England, speaking for so many, no matter if Labour or Conservative. If you are a bigot then I am a bigot, we are all bigots, all the people of this land who share your concern. From across the generations, from across all social divides, from across all political divisions I sincerely wish you well.