Appealing for an English Parliament on Saint George’s Day 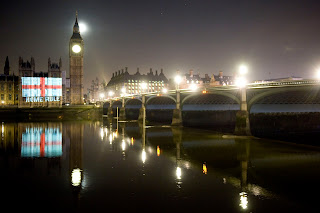 Today, the national day of England, Power 2010, a Rowntree-backed campaign group aiming at the reform of our political system and a fairer democracy, has released figures indicating that seven out of ten people now back a Parliament for England. The findings came as last night the movement staged a huge guerrilla-like projection of the Saint George’s Flag with the words ‘Home Rule’ on to the Palace of Westminster.

The poll, carried out by ICM, shows that 68% of voters in England believe that the country should have its own Parliament with similar powers to that of Scotland. In addition 70% of respondents said that English laws should be decided only by MPs representing English constituencies.

It’s worth stressing that this is about a perceived lack of fairness and democratic balance among ordinary voters, rather than Englishness as such. The poll of 1033 people across the country showed that almost half of the respondents feel “equally British or English.”

Pam Giddy, the Director of Power 2010, has rightly highlighted the fact England has not figured at all in the leaders’ debates, or in the campaign, though most people clearly want a fairer way of making decisions that affect their homeland. In a press release issued in the early hours of the morning she said;

It suddenly feels like we are on the cusp of seismic change to the way our politics is done. But so long as the unfair system we have at the moment persists it can only play into the hands of undemocratic voices like the BNP. With all the talk of reform in the air politicians should not duck the English question, but use the opportunity of Saint George’s Day to say where they stand.

For me there continues to be a certain degree of ambivalence here: on the one hand I do think that the Union has been greater than the sum of its parts, while on the other I toy more often with the idea of complete English independence. But what I am in no doubt about at all is that our present system is grossly unfair to the majority of the people who live in this kingdom, a point I made recently in England, it’s Time to Waken Up.

That piece also touched on the fact that the Conservative Party has committed itself to answering the West Lothian Question, and to that degree is in tune with and even one step ahead of the Power 2010 campaign. Still, I do not think that part of the Tory Manifesto is emphasised merely as much as it should be, especially as it would meet with such a receptive audience, given the evidence of this poll.
Posted by Anastasia F-B at 00:26