Teacher of the Queen 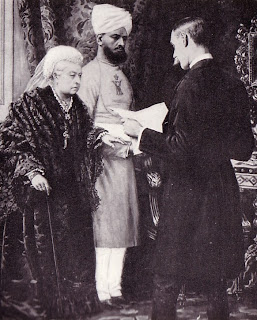 Most people, I imagine, will have seen Mrs Brown, the movie with Judi Dench and Billy Connolly, which details the close relationship between Queen Victoria and John Brown, the favourite Highland servant of Prince Albert. Victoria, in a mood of prolonged and morbid depression after he husband’s death, took comfort in Brown’s reassuring presence. Less well know is that when Brown died in his turn the aging queen found a substitute in another menial. His name was Abdul Karim, better known as the Munshi, or teacher.

Karim arrived from India in 1887, aged twenty-four, and soon acquired the kind of dominance over the royal household previously enjoyed by John Brown, another source of discomfort and annoyance to Bertie, the Prince of Wales and future King Edward VII. He initially came as an Indian waiter, one of two selected to serve the Victoria during her Golden Jubilee, but the year after she appointed him “Munshi and Indian Clerk to the Queen Empress at a salary of 12 pounds per month.” In this particular capacity he began to teach the Queen Urdu, as well as introducing curry into the royal menus.

From this point his influence grew and grew. He was the subject of special favours, even being in attendance when the Queen met with foreign monarchs and prime ministers. The relationship has been given fresh significance by the discovery of a new archive of letters and photographs, as well as the Munshi’s own handwritten journal, as The Daily Telegraph reported recently.

The bond between the two was so close that it incited gossip at the time, especially after the Queen spent a night with the Munshi at Glassalt Shiel, the isolated Scottish cottage by Loch Muick that she had once shared with Brown and had not visited since his death in 1883. But the journal records a purely platonic relationship, not at all surprising considering the Queen’s age and the Munshi’s youth. At the time she insisted that all criticism of her Indian servant was based on jealousy and racial prejudice.

In retrospect it does appear unseemly for Victoria to have advanced two servants in such a fashion, a fashion that was bound to cause resentment within the royal household and speculation in the wider world beyond. But, looking at the situation with very modern eyes, it seems to me that both Brown and the Munshi filled a deep void in Victoria’s emotional life that opened after the death of Albert, a void the could not be filled by her immediate family, with whom she was always cold and formal, especially not by her wayward eldest son, whom she held partly responsible for the death of her beloved husband. The Munshi was no more than a surrogate.
Posted by Anastasia F-B at 16:14