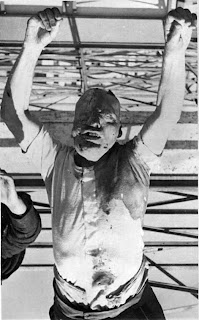 Ah, the politics of the dead, a subject which reveals so much about the living, whether it be over the fate of Evita in Argentina or Lenin in Russia. But it’s perambulations of the dead Mussolini that gives wonderful insight into the political health of post-war Italy.

After his death, and the display of his corpse in Milan, Mussolini was buried in an unmarked grave in Musocco, the municipal cemetery to the north of the city. On Easter Sunday 22 April 1946 his body was located and dug up by Domenico Leccisi and two other neo-Fascists. Making off with their hero, they left a bizarre message on the open grave "Finally, O Duce, you are with us. We will cover you with roses, but the smell of your virtue will overpower the smell of those roses."

On the loose for months-and a cause of great anxiety to the new Italian democracy-the Duce was finally 'recaptured' in August, hiding in a small trunk at the Certosa di Pavia, just outside Milan. Two Franciscan brothers were subsequently charged with concealing the corpse, though it was discovered on further investigation that he had been constantly on the move!

However, the Duce found was just as much of an embarrassment as the Duce lost to the fragile Italian government. This was a subject that divided the nation into mutually hostile camps; and unsure what to do, the authorities held the remains in a kind of political limbo for ten years, before agreeing to allow them to be re-interred at Predappio in Emila, his birth place, after a campaign headed by Leccisi and the Movimento Sociale Italiano. Leccisi, now a fascist deputy, went on to write his autobiography, With Mussolini Before and After Piazzale Loreto.

In the end it was, once again, all down to politics. Adone Zoli, the Prime Minister of the day, contacted Donna Rachelle, the former dictator's widow, to tell her he was returning the remains. He did so for one simple reason: he needed the support of the far-right in parliament, including Leccisi himself.

In Predappio Mussolini's tomb has become something of a fascist Mecca, constantly guarded by grim-faced, black-caped attendants. The whole thing is really quite vulgar, with Fascist kitsch on sale to the hordes of people who come to pay their respects, a source of both embarrassment and income to the left-wing local authorities! 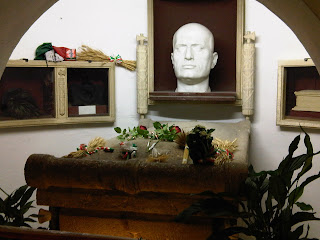 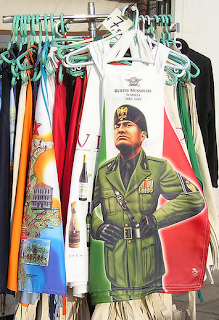