The Island of the Damned 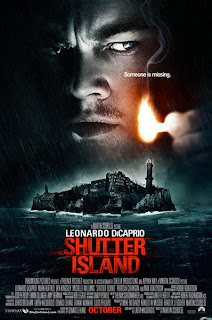 Martin Scorsese is one of the great American film makers with some real classics to his credit; movies like Mean Streets, Taxi Driver, Raging Bull, Goodfellas and The Aviator-a personal favourite of mine. So, given these impressive achievements, and given the director's obvious love of the medium, I really had to go and see Shutter Island, a psychological thriller set in Ashecliffe Hospital for the criminally insane, located on a remote and forbidding island, with all the appearance of Alcatraz for the mad.

The movie's long-possibly a tad too long- and full of all sorts of gothic horror and film noir cliches of one kind or other, from plagues of rats to thunder storms. But I loved it, I loved the multi-layered approach, the twists and turns of the plot. Most of all, I loved the re-creation of a particular period in American history, the early 1950s- 1954 to be exact-, when the country was gripped with a collective mood of fear and paranoia; domestic political with-hunts set against a greater terror of nuclear Armageddon.

This collective paranoia harmonises so well with the personal paranoia of US Marshall Teddy Daniels, played by the brilliant Leonardo DiCaprio, who comes to the island in the company of his partner, US Marshall Chuck Aulle, played by Mark Rufallo. There are there supposedly to investigate the disappearance of a patient by the name of Rachel Solando, played by Emily Mortimer, who has been incarcerated in Ashecliffe for drowning her three children.

This is one of those movies almost impossible to review without retelling the story, something I really dislike doing, because I think it's best to hint at the highs- and the lows- without spoiling things for those who really do wish to discover the key for themselves. Suffice to say that there is a huge plot twist here which is only fully revealed as we move towards the end, though, at the risk of being thought a complete smart arse, I worked out the denouement, oh, about half way through. :-))

Let me just say this is a world, the world into which Daniels is propelled, that moves in ever more claustrophobic circles. This is a world where the boundaries between his own personal traumas- which included being present at the liberation of Dachau Concentration Camp- and the more widely-based traumas of Ashecliffe breaks down altogether. This is a world, in short, where it is impossible to tell what is real and what is delusion. Is Daniels deluded; are we deluded; is the world deluded?

There are some great performances, including that of the unfailingly impressive Ben Kingsley as Dr John Crawley, the head psychiatrist, avuncular and slightly sinister by turns, and Max von Sydow, who plays Dr. Jeremiah Naehring, ironic and provocative, a character allowed to carry hints of something even more sinister, of human experimentation and Nazi camps. He certainly fills Daniels with suspicion, as does everyone in this increasingly bizarre island of the damned, where nothing is quite what it seems, where the missing patient proves as illusive as a will-of-the-wisp, where a greater truth seems to be even more elusive, symbolised by the island's disused lighthouse.

Yes, the whole thing is a kind of pastiche of a particular genre movie, a kind of Hitchcock extravaganza. There are even elements of sardonic humour, though I can't be sure if this was intentional on Scorcese's part or not. Shutter Island may not be a great movie by the high standards the director has set himself; but it's a great movie by the standards of those less prolifically gifted. As a mystery thriller I found it hugely enjoyable, and as a piece of Sturm und Drag horror even more so, especially with all those reassuring boom and bash cliches and prop devices. After The Hurt Locker I have no hesitation in saying that this is the best movie I have seen so far this year.