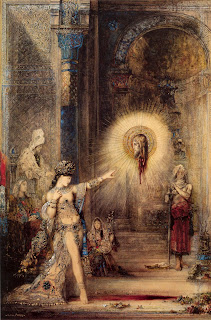 I love the plays of Oscar Wilde, all of his witty, intense comedies but it is Salome, his single tragedy that intrigues me most. As a play it’s fully consistent in its presentation with Wilde’s theory of drama. In one of his letters he says that "...I like comedy to be intensely modern, and tragedy to walk in purple and be remote." And I don't suppose it is possible to get more purple and remote than Salome!

Though obviously based on the Bible story, the play had more contemporary sources of inspiration. It was through a reading of Joris-Karl Huysmans’ novel À Rebours that Wilde became aware the Salome paintings of Gustave Moreau, which Des Esseintes, the hero of the book, obsesses over. It was an obsession that the playwright came to share.

There is a third source of inspiration for the play, beyond Huysmans' novel and Moreau's paintings. In 1888 the Pall Mall Gazette published Salome, a dramatic poem by an American named J. C Heywood. This in turn draws on Heinrich Heine's Atta Troll, in which the ghost of Herodias kisses the head of John the Baptist. Heywood's innovation was to make her do this while still alive. It was Wilde who took this one step further, to make Salome kiss the lips of the Baptist in the great dramatic climax of his play;

Purple and decadent; who else but Wilde could have achieved that?! 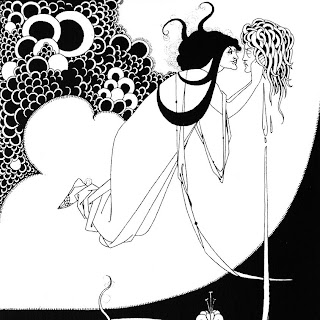