Stands Scotland where it did? 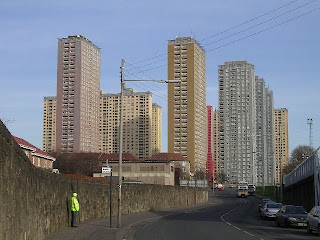 I do try to keep abreast of Scottish politics though it's becoming increasingly difficult to do so, given the amount of press coverage there is in England on Scottish matters. One really does get the impression sometimes that Washington or Moscow are closer than Edinburgh; one gets the impression that Scotland is only in the most nominal sense part of the United Kingdom.

Still, Scotland is largely a self-governing country and I don't suppose that too many stories about Boris Johnson and London appear in the Herald or the Scotsman. But devolution, for all its promise, has not brought a new Golden Age, not even a Gilded Age; just a Tawdry Age. An editorial in last week's Spectator (The Scandal of Scotland) drew my attention to some uncomfortable developments, well, uncomfortable for the people of Scotland.

Because the Labour Party had such a grip on northern affairs, especially in urban centres like Glasgow, corrupt Tammy Hall-style politics became rather the fashion for such a long time. But then came the new face on an old body; then came Steven Purcell, the leader of Glasgow District Council, a moderniser, something of a Blairite, I suppose, rather an oddity in Mad Gordon's fiefdom. He was the man to watch, says The Spectator, the politician who could take back the Scottish Parliament for Labour, a sign that the old-style cronyism and corruption was dying.

Well, not any longer, he's not. He was unmasked recently as a cocaine addict. What makes the story even more lurid is the suggestion that his habit made him vulnerable to blackmail by the city's cocaine-driven underworld. In a bizarre twist a teenage boy, a close friend of Purcell's, collapsed and died close to the ex-councillor's former office on Friday. It's an astonishing tale of which I had previously heard nothing, neither a twitter nor a tweet. Just imagine if this had been Boris. The story would run and run. The Spectator says that Purcell's rise and fall is "a grim allegory for the tragedy of devolution." It also seems to to me emphasise the depth of Scotland's marginalisation, both in Britain and the wider world, the deep parochialism into which the country has sunk.

Yes, the implosion of Purcell's career does indeed illustrate that nothing much has changed; that the old corrupt Adam is still very much in place. The devolved Parliament is not the confident voice of a nation reborn but Glasgow District Council writ large. Scotland wanted freedom; what it got was politicians; politicians of the calibre of Henry McLeish, a former First Minister, who resigned in an expenses scandal before the Expenses Scandal. Politicians like Lord, yes, Lord Mike Watson, who was charged and convicted with drunkenly setting fire to hotel curtains at the conclusion of the Scottish Politician of the Year Awards in November 2004. Why? Because the waiters refused to give him any more to drink.

There seems to me to be a deep shabbiness and mediocrity to the whole spectacle of Scottish politics post-devolution. Interestingly enough, the best people still avoid Edinburgh, preferring to come down to Westminster, leaving so many second-raters in the Scottish pond. There is Alex Salmond, of course, First Minister in the Scottish National Party minority government, the one big beast, the one Nessie in the Loch. But he can't take comfort in the misfortunes of Labour because his own government has proved naive and inept. He found himself accused recently of abusing the privilege of his office by auctioning lunches in the Scottish Parliament in aid of party funds. Nicola Sturgeon, his deputy, has been struggling to explain why she wrote to the courts on behalf of a serious fraudster, one of her constituents, asking that he be excused a prison sentence. There is no suggestion of venality or personal involvement here, no, just unbelievable levels of political incompetence. And then there is Addul-baset al-Megrahi, the Libyan bomber. Do you remember him? Well, he's not dead yet. :-)

When one adds to this laughable political carnival all of the serious problems from which Scotland still suffers, add to this problems like Purcell's Glasgow, where cocaine usage is among the highest and life expectancy among the lowest in the developed world, then one can indeed see that devolution was simply the wrong solution. The country looked for hope, a fresh beginning, new horizons, what you will. Instead it got old faces in new limousines. For a country that once stood on the frontier of the Enlightenment, a country that gave Adam Smith and David Hume to the world, its a wretched terminus.
Posted by Anastasia F-B at 15:25