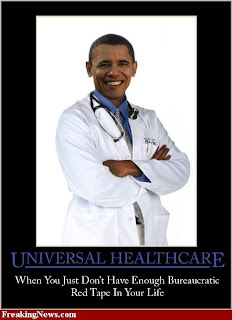 The Obama camp is jubilant over the health care 'triumph.' I suppose one has to allow them a moment of celebration; after all, it's been a long a difficult passage, a hard fight, not just in the House and Senate but across the country at large. It may lead, I'm sure they hope, to a Democrat bounce-back in the face of a steady Republican advance; it may lead to a renewal of the increasingly tired-looking Obama brand itself. Ah, but wait; let a little sobriety descend. The time is coming, and coming soon, to ask just exactly what kind of victory has been achieved. One battle has ended; other battles may be about to begin.

Ever since the United States was founded there has been a tension between local rights and federal authority. The issue was supposedly resolved after the Civil War, when the victory of the North over the South led to the formation of “a more perfect union", which seems to have meant a more centrally controlled Union, a Union directed from Washington. But the issue of States' rights never entirely went away. Now a new Civil War may be about to break out, though on a far lower and less intense level than that of the 1860s.

On 10 March Virginia, one of the greatest of the old Confederate bastions, the home of both Thomas Jefferson and Robert E. Lee, passed a law saying that citizens of the state can neither be required to have health insurance nor be penalised for not having it. The interesting thing is that the bill passed through both houses of the state legislature with considerable support from the Democrats. Idaho followed this lead a week later and the voters of Arizona will have the opportunity later this year to decide whither such protections should be written into the state's constitution. Seemingly similar measures are in process in no fewer than 35 other states, according to the American Legislative Exchange Council, which means that, if these measures are carried through, almost half the Union will have local legislation in direct conflict with federal law.

There should really be no contest here; for legislation passed by the national Congress takes priority over that passed by the states, the issue supposedly settled once and for all in the nineteenth century. Oh, if only it were so simple! Obama's legislation, so many believe, is in direct conflict with the constitution. As I have said states' rights have proved to be remarkably resilient. In Gonzales v Oregon, a case concerned with a local assisted-suicide law, the government argued that doctors who prescribed lethal doses of medication were violating federal law, an argument rejected by the Supreme Court, believing that it would constitute "a radical shift of authority from states to the federal government to define general standards of medical practice in every locality." The Supreme Court has also recognised a right to medical self-determination.

But the strongest argument of all, as The Economist reported recently, concerns the power of the government to make the purchase of health-care insurance obligatory. The commerce clause in the constitution allows the federal government to regulate trade between the states but it has never before been used to require citizens to buy a good or service.

Still, even with these caveats and qualifications, it's difficult to see that the Supreme Court will do anything quite as drastic as invalidating the supremacy clause, as invalidating the mandate of Congress. State laws to the contrary are, on the balance of probability, likely to be set aside, something that happened repeatedly over the course of the last century. Even so, Obama might have been said to have conjured up a ghost Confederacy, an indication of deep national anxiety. The celebration may very well have been premature.
Posted by Anastasia F-B at 19:54