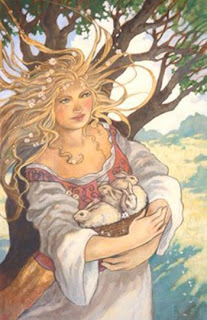 Easter is almost upon us, a term I prefer to Ostara, favoured by those in the Wiccan movement. Yes, I know it's the most significant day in the Christian calendar but many of the things most associated with Easter have nothing at all to do with Christianity, most particularly those egg-delivering bunnies! It also has links with old pagan fertility rituals, of the renewal of times, of new birth and new beginnings. It is Persephone emerging from the Underworld.

The name itself honours a Germanic deity, variously spelt as Astara, Easter, Eostre and Ostara, thought at least by some to mean 'Radiant Dawn.' In essence Easter was the spirit of the spring, whose annual return was celebrated with flowers bell-ringing and singing. At dawn new fires would also be lit, another sign of empowerment.

Easter comes in the form of a beautiful young woman, whose male consort comes in the form of a rabbit; and what more fecund symbol is there than that! The eggs the rabbit brings is another indication of a resurgence of the Earth's fertility. It's not so far in the past that the symbol of such fertility was even more direct: in French, German and Italian villages special phallic-shaped cakes were carried in procession, not stopping short of the local church!

Easter is also another of the seasons of the witch, at least it is in Sweden and parts of Finland. It was a time when witches here traditionally joined together in celebration, beginning on the night before Maundy Thursday and continuing through Easter Eve, when witches mounted on brooms flew up chimneys in the company of their cats. Such was the fear of the Easter Witch that people would lock the doors of their homes and barns, as well as blocking up chimney flues. More than that, anything that could possibly used by witches, including brooms, pitchforks and rakes, were locked away least one was accused of helping the witches have fun! Crosses were also drawn on doors to let passing witches know that they were unwelcome, just as fires were kept burning in hearths to prevent them being used as a point of entry. Some of these traditions still survive; for it is Easter that children dress as witches in Sweden, not Halloween. 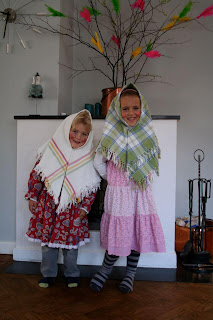 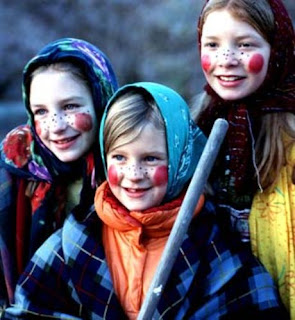