In Praise of Empire 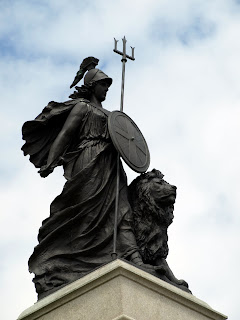 The British Empire was a force for good in the world. There, I’ve said it! I’m not the first, though, to swim against the tide on this question. Those who wish an effective counter to all of the past negativity could do no better than have a look through Naill Ferguson’s Empire: How Britain Made the Modern World.

Yes, we did make the modern world, not through a self-conscious and ugly imperialism that characterised the French colonial enterprise; no, but simply in the pursuit of trading opportunities, the life blood of a mercantile island nation. In the wake of the traders and the buccaneers our people(stress here on the possessive pronoun!) travelled across the earth, building up the great English-speaking nations; building what was to become the United States, Canada, Australia, New Zealand and South Africa, as well as a host of smaller nations within this great backbone of liberty and democracy.

The British also in a very real sense helped to create modern India, giving it a political unity it never before possessed in its history; giving it a rail transport system which still functions today; giving it a common language which has managed to unite such a diverse and polyglot nation, allowing it to make an impact on the modern world.

Even in leaving Empire there was often a magnanimity and greatness. There is no better contrast here than with how the British dealt with the communist insurgency in Malaya, while nurturing moves towards independence, and how the French dealt with that in Indochina. And just imagine what would have happened if the French had predominated in North America and, more particularly, what would have happened if they had not been kicked them out of India. Our exit from India was far from tidy but how much worse it would have been going by the French example, the example of Vietnam and Algeria.

The British Empire was also a huge exporter of capital, building roads, railways and industries all over the earth, to great benefit to local economies, as indeed was the introduction of a system of education. Administrators sent out from England were generally scrupulously fair, bringing government and order to places that often had neither the one nor the other.

The system of English common law was another of our exports, still used and valued across much of the world, as indeed was the parliamentary system of government and the economic model of free-trade capitalism.

Paradoxically the British, true to their rather diffident nature, did not value the Empire during its heyday, a point I made in a recent post. I’m not asking for a retrospective attachment to that which is dead and gone, just a better understanding of how important the Empire was and, for all its faults, how benevolent, greater even than Rome at its apogee.

But yet I know, where’er I go,
That there hath pass’d away a glory from the earth
Posted by Anastasia F-B at 16:04