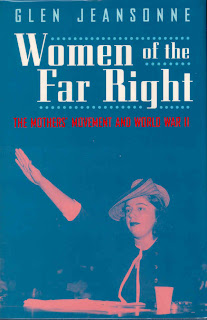 The movement was also anti-Roosevelt, viciously so. Agnes Waters argued that FDR wanted to rule the world as a communist dictator in league with the Jews! Her whole world view is so bizarre that it is difficult that any woman, let alone six million, could have been attracted to this movement. Her range of conspiracy theories was even more outlandish than those of the Nazis. Neville Chamberlain, the British Prime Minister, had, so she said, invited Hitler to attack Britain to allow him to raise taxes. When Hitler invaded the Soviet Union in 1941 this came by Stalin's invitation, because he needed an external threat.

Her political logic gets even worse, and it's difficult to believe that any person could entertain such conflicting views without actually being clinically insane. Roosevelt and the Jews were conspiring to end American independence by returning the country to the rule of the British Empire. This would then be merged with the Soviet Union; Christianity would be outlawed, and a world government would be created, ruled over by Roosevelt and Hitler!!! Hitler, you ask? He hated the Jews, how could he possibly unite with Roosevelt, the Jew lover and Communist? Well, you see, the Nazi leader was secretly a Bolshevik, and would make an open confession to that fact at the end of the war. Where, one has to ask, were the men in white coats?

The ever resourceful Mrs Waters had a 'cunning plan' to thwart this dastardly scheme. First, impeach Roosevelt, before making Henry Ford commander-in-chief. Second, abolish conscription in favour of drafting all of the convicts, and let them do the fighting. And what if there were not enough convicts? Why, that's easy: take Mexico, Central and South America and force all the Latinos do the fighting for you. How one was to achieve this with an under-strength convict army is not quite clear. The indomitable Mrs Waters was ready for the Jews though; "Just let the Jews come in and the pistol-packing mamas will take care of them. There will be nothing left of them." So, no need for the convicts then!

Compared with Waters Elizabeth Dilling appears almost sane, though her malevolence was much more purposeful and to the point. When the Senate debated the Lend-Lease legislation in February 1941 she led a delegation of 500 women from Chicago to Washington, where they picketed the Capitol and harangued senators who were in favour of the measure. For all this she won over only one senator-Dennis Chavez from New Mexico.

Catherine Curtis, a fellow anti-Semite, founded the 'Women's National Committee to Keep the U.S Out of the War' shortly after Hitler invaded Poland. Growing in influence, she later took over the leadership of the larger National League of the Mothers of America. In this capacity she went on a speaking tour, blaming British imperialism for the war. Her friend, the aviator Laura Ingalls, flew over the White House, dropping Curtis' anti-war leaflets on the way. Ingalls was later discovered to be a German agent and a traitor.

Yet another of these 'wild women' of the right was Lyrl Clark Van Hyning, who set up 'We the Mothers Mobilize for America' in February 1941. By the early summer of that year the group was claiming a membership of 150,000 women nationwide. For Hyning Jesus and his disciples were all gentiles, except, of course, for Judas. The Jews had inspired the American Civil War, the assassination of Lincoln, the First World War and the Second, as well as the election of Roosevelt.

This alliance of right-wing groups did not disperse, unlike other non-interventionist groups, after the United States entered the war. If anything, some became even more viciously perverse. One member of the Philadelphia branch of the National Legion of the Mothers of America said that that the attack on Pearl Harbor had really been the work of the English, flying the Japanese flag; another that she would willingly be shot for treason, rather than fight on the same side as the Soviet Union.

But in the end they counted for little, hardly surprising when one considers the delusions and fantasies which filled the minds of those who took on the national leadership. What puzzles me, and the question I would have to ask, is why a national movement of pacifism and non-intervention, reasonable enough positions, whether one agrees with them or not, came to be controlled by the kinds of people normally to be found on the more outrageous fringes of politics and society?
Posted by Anastasia F-B at 19:43