A Touch of the Crazies 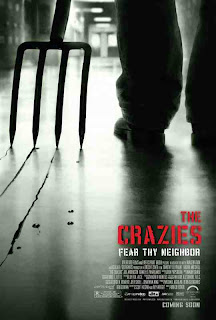 Is it good; did I enjoy it? Up to a point, yes, I did. Unfortunately I haven’t seen the original so I can make no direct comparison, though I understand that was made on a far leaner budget. But, given the theme, that of loonies on the rampage, there really is only so much one can do with money. It’s a reasonably good story with some nice twists, though there is nothing either new or unexpected. .

Directed by Breck Eisner, The Crazies tells of a small farming town whose water supply has been contaminated by an unknown toxin which has the effect, you guessed it, of turning people crazy, murderously so. In the midst of the mess is Sheriff David Dutton, played by Timothy Olyphant, and his wife, Doctor Judy Dutton, played by Radha Mitchell, are the only two to remain completely sane amongst the neighbour eat neighbour mayhem. I’m not quite sure how, though, unless they refused to touch the local water! Perhaps they only drink the bottled stuff. :-)

It turns out that the toxin is a kind of biological weapon, a virus released by accident when a plane crashed in the nearby lake. But it is so lethally contagious that the military seals off the town, intending, as it turns out, to stop the spread of the infection by exterminating everyone, infected or not.

The Duttons, accompanied by Deputy Sheriff Russell Clank, played by Joe Anderson, who himself starts to get the crazies, attempt an escape through the perimeter erected around the town. Sheriff and wife make it, but the movie concludes on a fairly bleak note. As they approach the city of Cedar Rapids a satellite view of the Earth is shown and the words “initiate contamination protocol”. The whole horror, one surmises, is about to start again, though on a larger scale, with the subliminal message that the real enemy is the state itself; that this is indeed how governments would behave in the face of doomsday.

There are few surprises here but if you like knock-about horror, thrills, spills and gore then this is your movie. There is also a decent amount of black humour, something I particularly enjoy. So, yes, go and see it; just don’t go crazy. :-))