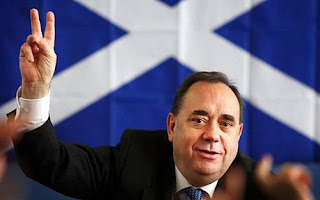 I dislike dipping my toes into Irish politics because the waters are far too cold. It seems fairly obvious, though, that Sinn Fein only entered into a power-sharing agreement with the Unionists because that offered a way of advancing the cause of a united Ireland by other means, a way of meeting their agenda other than by guns and bombs. The question arises just how meaningful a united Ireland would be in the context of the European Union, which bleeds out all national identity. What the Unionists hope to gain beyond peace for the sake of peace I do not know, but they have allowed the Trojan Horse through the city gates.

Now I intend to sidestep the issues raised here, because it’s not Ireland that I want to talk about at all! No; it’s Scotland. There Alex Salmond, the First Minister of the devolved government, also has an agenda –he wants independence; he wants the Scottish people to have a referendum on independence, though almost everyone else, beyond his party, seems to think the whole thing an irrelevance. More than that, the Scottish National Party (SNP) minority government is looking increasingly unpopular, as economic woes take precedence over empty gestures.

Scottish politics is well outwith my comfort zone but there are, it seems to me, some obvious and interesting paradoxes at work. Two in particular deserve mention. First, it is wrong to assume that a vote for the Nationalists is necessarily a vote for independence. Tory voters may very well vote SNP where the alternative is Labour, just as Labour voters will if the alternative is Tory.

The second factor is what be called the ‘Scottish grumble’, for want of a better expression. You see, Salmond’s cause, the cause of independence, needed the ‘we are hard done by’ mood induced when the country was governed from London, when every fault could be placed at the door of the English. Devolution may have brought the SNP to government just as it has taken them further from their goal; for the grumble is now directed not at London but Edinburgh!

Salmond has one last ace: he is hoping, he is praying, for a hung parliament at Westminster, one that he declared not so long ago would ‘hang by a Scottish rope’, his rope. In his most optimistic mood he has predicted that his party will win up to twenty seats in Parliament.

Yes, in this highly unlikely event he may gain concessions, as he props up the government of his fellow Scot while infuriating the people of England, but so what? Independence itself would still have to be decided in Scotland. In the absence of the Big Bad English Wolf Salmond’s dream recedes ever deeper into the land of make-believe and illusion. He needed his enemy far more than he needed his friends. I wonder if he has the wit to understand that simple truth.
Posted by Anastasia F-B at 16:24