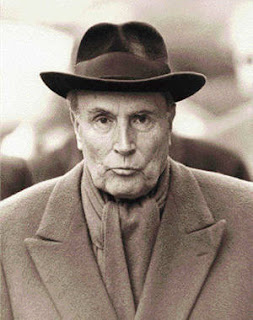 Following on from my recent piece on Sarkozy’s visit to Rwanda I though I would add a separate article on Francois Mitterrand, the man who was president of France at the time of the genocide, the man who bears a singular responsibility for what happened, the man whose ignorance and turpitude made him conceivably the worst head of state the French have ever known, not excluding Marshal Petain, his hero and avatar.

What an odd thing, is it not, for a socialist to have an old reactionary like Petain as a hero. Ah, but you see, this is where we begin, with confusion, inconsistency and the worst forms of opportunism imaginable. In political terms the French are quite capable of switching from the camp of Caesar to the camp of Brutus, without any major qualms of conscience. But try to imagine being in the camp of Caesar and Brutus at one and the same time. Can you picture such a thing; can you understand such a thing? If you can you are already on the way to understanding the kind of man Mitterrand was.

I don’t really want to dig too deeply into old ground; there is plenty of material already on this man’s shady past and I suspect that there will be more to come in time. Let me just say that when it came to reconstructing the record Mitterrand had a tendency to be not just economical with the truth but parsimonious in the extreme, at least until the full story came out when Pierre Péan, an investigative journalist, published Une jeunesse française: François Mitterrand, a study of the man’s life and actions between 1934 and 1947. By one of those small ironies that fate enjoys it was published in 1994, the year Mitterrand acted as godfather to the Rwandan Holocaust.

Before this book appeared Mitterrand had either lied about his past or suffered from a highly convenient amnesia. In his youth he had supported the Popular Front, the socialist-communist alliance presided over by Leon Blum. In the war, after he escaped from a German POW camp, he became “a resister after no great agonising”, to use his own words. The truth is quite different. His associations were not with the Popular Front but with Action Française, the Croix de Feu, Le Camelots du Roi and the Cagoulards, monarchist, racist, anti-Semitic and terrorist organisations, some of whom specialised in political assassination, including the planned assassination of Leon Blum.

Mitterrand’s motto really should have been ‘don’t mention the war’, or at least don’t mention all of it. Once back in France he became a minor Vichy functionary. This was not just a job; he wasn’t just another bureaucrat, dedicated to serving authority, regardless of its political complexion. No; this was born of conviction, of support for what the Petainists called the ‘National Revolution.’ His sympathies are revealed in two articles he published in 1942, once criticising France for “150 years of mistakes”; criticising it, in other words, for the Revolution of 1789 and all that came thereafter. In the other article he approves the formation of the Service d'ordre légionnaire (SOL), though lamenting its lack of “fanaticism”. He need not have worried about that, for the following year the SOL became the Milice, notorious for torturing and murdering members of the Resistance and collaborating in the Holocaust. 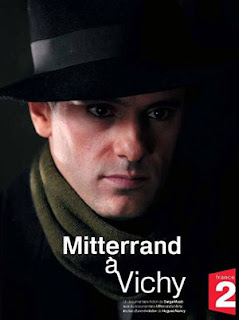 After Péan’s book appeared Mitterrand made all sorts of implausible excuses, more lies and dissimulation. But there was one particularly revealing admission in a television interview. In a response to a question about Vichy’s Jewish Statute he said that it was a piece of legislation against foreign Jews about which he had known nothing.

All I can say is that he must have been both blind and deaf not to know of this Statute. But that’s not the crucial point, no; the Statute was directed against all Jews, but even if it had not been this hardly makes it more defensible, as one author wrote. There he is, still the residual Vichyist, still holding the prejudices of that benighted age, still distinguishing between French and ‘foreign’ Jews. He could not condemn the past because he was the past.

Yes, he was the past and by his friends the French should have known him; friends like the notorious René Bousquet, the former secretary-general of the Vichy police, the man responsible for the Vel' d'Hiv Roundup in Paris in 1942, in which some 13,000 Jews were sent to their deaths. In 1992 when a committee dedicated to remembering this outrage tried to get an official apology for the actions of Vichy against the Jews Mitterrand refused. The apology came in due course, but it was made by Jacques Chirac, his Gaullist successor, in yet another peculiar irony. 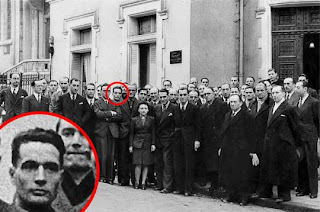 So, there we have it, there we have a taste of the career of France’s first socialist president. De Gaulle was right; Mitterrand was a ghost who came from the deepest depths of the collaboration. His career should have ended in 1945 but for the forgetfulness that descended on France, encouraged by de Gaulle himself. To have a man like Mitterrand as president says a lot about French socialism; says a lot about France.
Posted by Anastasia F-B at 16:11