Beyond the Pale; English Perceptions of the Irish 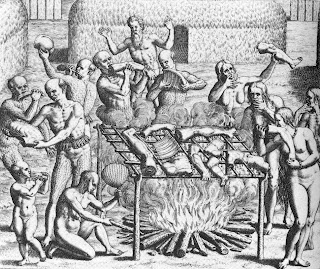 Negative English attitudes towards the Irish date as far back as the reign of Henry II. One could do no better here than examine the things written by the chronicler Gerald of Wales, who visited the island in the company of Prince John. As a result of this he wrote Topographia Hibernia (Topography of Ireland) and Expugnatio Hibernica (Conquest of Ireland), both of which remaind in circulation for centuries afterwards. Ireland, in his view, was rich; but the Irish were backwards and lazy;

They use their fields mostly for pasture. Little is cultivated and even less is sown. The problem here is not the quality of the soil but rather the lack of industry on the part of those who should cultivate it. This laziness means that the different types of minerals with which hidden veins of the earth are full are neither mined nor exploited in any way. They do not devote themselves to the manufacture of flax or wool, nor to the practice of any mechanical or mercantile act. Dedicated only to liesure and laziness, this is a truly barbarous people. They depend on their livelihhod for animals and they live like animals.

Gerald was not atypical; for one can find similar views in the writings of William of Malmesbury and William of Newburgh. When it comes to Irish marital and sexual customs Gerald is even more biting, "This is a filthy people, wallowing in vice. They indulge in incest, for example in marrying-or rather debauching-the wives of their dead brothers."

Even earlier than this Archbishop Anselm accused the Irish of 'wife swapping', "...exchanging their wives as freely as other men exchange their horses." You will find these views echoed centuries later in the words of Sir Henry Sidney, twice Lord Deputy during the reign of Elizabeth I, and in those of Edmund Tremayne, his secretary. In Tremayne's view the Irish "commit whoredom, hold no wedlock, ravish, steal and commit all abomination without scruple of conscience." In A View of the Present State of Ireland, published in 1596, Edmund Spencer wrote "They are all papists by profession but in the same so blindingly and brutishly informed that you would rather think them atheists or infidels."


This vision of the barbarous Irish, largely born out of a form of imperialist condescension, made its way into Laudabiliter, one of the most infamous documents in all of Irish History, by which Adrian IV, the only English Pope, granted Ireland to Henry II, "...to the end that the foul customs of that country may be abolished and the barbarous nation, Christian in name only, may through your care assume the beauty of good morals."


All and every method was to be used in this 'civilizing mission' over time. In 1305 when Piers Bermingham cut off the heads of thirty members of the O'Connor clan and sent them to Dublin he was awarded with a financial bonus. His action was also celebrated in verse. In 1317 one Irish chronicler was of the view that it was just as easy for an Englishman to kill an Irishman as he would a dog. Later when the English control of Ireland shrunk back for a time to The Pale around Dublin, all beyond was considered as given over to savagery, hence the expression 'Beyond the Pale'.


What we see here is the same thing that appears time and again, throughout the whole world, and over all time: it begins when an entire community is condemned as barbarous; it ends with the justification of all and every method in the creation of 'civilization', no matter how barbarous. It is against this background that one must place the Cromwellian Conquest and all that followed, in both Hell and in Connaught
Posted by Anastasia F-B at 13:10