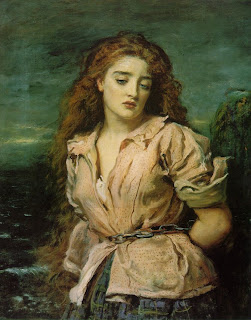 I cannot think of a dynasty more deserving of the honour of being known as Les Rois Maudits, the Accursed Kings, than the Scottish Stuarts. Now, I'm probably exaggerating slightly- and I certainly do not want to hurt Scottish feelings -but the family was notorious for its bad luck and ill-fortune, leaving Scotland with one troublesome minority after another.

Even James IV, in some ways the brightest star in the Stuart heavens, was to lead his country into arguably the most unnecessary war in its history, where no Scottish interest was threatened and none served; the occasion for the most devastating defeat. In the end even the French, most consistent in the support of the exiled Stuarts after the Glorious Revolution had enough of them. Louis XVI described them as an 'unlucky family' and refused to extend them any further political support.


Yes, they were a burden to Scotland both before and after the the Union of the Crowns in 1603. James VI, probably the last of the Stuarts who really understood his native land, left for London in that year, promising to come back at regular intervals. He returned just once. Scotland could be safely 'governed by pen', as he put it, which meant that he could impose unpopular religious policies, like the Five Articles of Perth, without any real degree of consensus; a policy that was to be a serious source of future trouble.


Though Charles I, James's son and successor, was born in Scotland, and spent the first few years of his life there, he understood almost nothing about the country. Indeed, he troubled himself so little about his northern kingdom that his Scottish coronation only came in 1633, some eight years after that in England. His arrogance towards the Scots became particularly pronounced in his religious policy. Heeding no advice, he insisted on certain Anglican-style 'reforms' in the Scottish Church which lead in the Covenanter Movement to a national revolution, a crisis that proceeded through the Bishops' Wars to the Wars of the Three Kingdoms.


Under Charles II the Scots fared even worse. He came to Scotland in 1650 with the clear intention of using the country to recover the English throne. In the end he led another disastrous and ill-advised invasion of England, like that of James IV, which crashed to defeat at the Battle of Worcester. Charles managed to escape but Scotland was, for the first time in its history, thoroughly and completely conquered, prior to absorption into the English Protectorate.


Though nominal independence was recovered on Charles' Restoration in 1660 he showed very little gratitude for the Scots' former sacrifices. Once again a policy of religious coercion was introduced, the cause years of trouble and oppression in the Lowlands, punctuated by sudden bursts of violence, like that at Rullion Green in 1666 and Bothwell Bridge in 1679. The repression continued through the so-called Killing Time.


Though the Stuarts had never shown any great sympathy for the Highland clans, their support for the exiled James VII and the whole Jacobite cause was, in the end, to contribute directly towards the destruction of their whole way of life. For the later Stuarts Scotland was nothing more than the backdoor into England; never more so than for Charles Edward Stuart, James' grandson, who was the cause of the 1745 rebellion, a military and political adventure of the worst kind, which ended at Culloden in 1746. Charles got away, but the consequences for the Highlands were considerably worse than that which followed his grand-uncle's gamble in 1651. The romance later associated with 'Bonnie Prince Charlie' has always seemed to me to be astonishingly misplaced; as if a comforting fiction is felt to be somehow better than a rather sordid reality.


To the above I would add one further 'burden': the reign of William of Orange, partially Stuart and married to a Stuart. His was the time of the Glencoe Massacre, the Darien Disaster; a time of famine; a time of deep national self-doubt. One 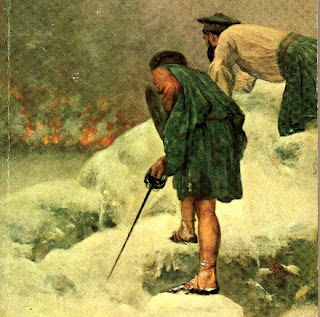 could, indeed, wish for a better set of princes!
Posted by Anastasia F-B at 13:22