A Good Man and a Useful Idiot 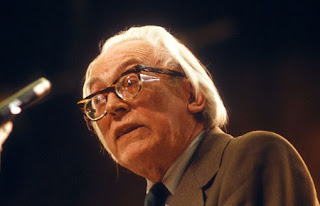 At the outset of Tristram Hunt’s appreciation of the life of Michael Foot in yesterday’s Observer he mentions something once said by Isaac Foot, Michael’s father and a one-time Liberal MP. It goes like this: “I judge a man by one thing, which side would he have liked his ancestors to have fought on at Marston Moor?”

I suppose he would judge a woman by the same standard, in which case I am delighted to say that I have absolutely no doubt about the answer to that; I would have wanted them to fight on the side of the Royalist army commanded by Prince Rupert, preferably among Lord George Goring’s regiment of horse on the left of the field. So there!

Clearly old Isaac and I would have had very little sympathy for one another, but I might conceivably have got on famously with his son, at least with the donnish side of his son, a man who loved history as much as I love history; a man who loved Swift and Hazlitt as much as I love Swift and Hazlitt. Yes, we would have had our differences; I admire the politics Pitt the Younger just as he hated them, and I think Thomas Paine a grossly overrated writer and a traitor besides!

You see, there is so much about Michael Foot the politician and activist that I simply don’t understand. I don’t understand how he could write a book like Guilty Men, condemning the principal architects of appeasement, when he in his own way was just as guilty, perhaps even more guilty, both in the 1930s and again in the 1980s, embracing conventional unilateral disarmament, in the first period, and unilateral nuclear disarmament, in the second, when both of these policies were positively harmful to this country. I would go further: appeasement was a necessary cover for rearmament, whereas promoting disarmament in the face of Nazi Germany and Soviet Russia appears to me to be objectively treasonable. I hope I’m not being too harsh.

The tributes to Foot have been lavish and it’s easy to see why. He was a decent, thoughtful and humane man. It’s easy to see why when you compare him, unspun and homely, to the present shabby shower of Labour politicians; men like foul-mouthed Mad Gordon Brown and the oleaginous Peter Mandelson, aka Lord Rumba of Rio. Even The Spectator, the home of the political enemy, says of him that he was a “wonderful man.”

Still, one has to retain a sense of proportion here; yes, in many ways he was a wonderful man but as a politician he was quite hopeless. He was also strikingly naïve, allowing himself to be used by the KGB, as Charles Moore pointed out in Saturday’s Telegraph, holding regular meetings with Soviet agents, and even accepting small cash donations when he was editor of Tribune without asking questions. Again I hope I’m not being too harsh but I fully agree with Moore when he describes Foot as belonging to a sentimental Left, full of what Lenin once referred to as “useful idiots.” If only he had remained with the Swift and the Hazlitt.
Posted by Anastasia F-B at 16:50