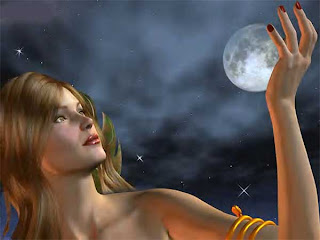 Cerridwen, sometimes referred to as the Old One, is a shape-shifting lunar deity, a master magician and an herbalist. Though she can take any form she wishes, she favours of a woman or a great white sow, a clear symbol of the Moon, linking her to the Roman Diana. Like Diana Cerridwen is one of the great witch deities, the Keeper of the Cauldron of Knowledge. She also has associations with Hecate, the goddess of all the witches.

Reference to her first appears in the Book of Taliesin, a compilation which may date as far back as the ninth century AD. According to the myth she is married to a giant by the name of Tegid Foel, living near Bala Lake in North Wales. The couple had two children – a daughter called Crearwy, meaning beautiful or light, and a son called Afagddu or Morfran, though in some versions of the story the two are given as brothers. Afagddu is as ugly and dark as Crearwy is fair and beautiful. There is an obvious symbolism here in the division of nature into two complementary but contrary principles, summer and winter, day and night, female and male.

Cerridwen is the goddess of dark prophetic powers. In her Cauldron she brewed a potion granting the gift of wisdom and poetic inspiration. Gwion Bach, later to become Taliesin, the noted Welsh poet of the sixth century AD, is said to have accidentally tasted three drops from the Cauldron, instantly giving him great wisdom and insight. Following in this tradition the Welsh Bards refer to themselves as Cerddorion (the sons of Cerridwen).