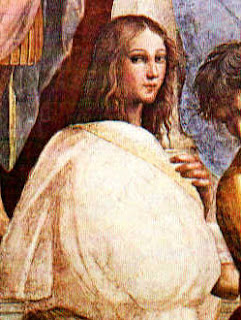 Hypatia of Alexandria is one of the women from whom I have a lasting reverence. For me she represents the last flourishing of the scholarship of the old classical pagan world. Born sometime after 350AD, she became a noted mathematician, philosopher and astronomer. In philosophy she was a Neo-Platonist, following in the tradition of Plotinus, a third century thinker, placing her greatest intellectual stress not on empirical inquiry but on logic and mathematical studies.

The daughter of Theon, himself a noted mathematician, she travelled to both Athens and Italy before becoming head of the Platonist school in her native Alexandra in about 400AD. One contemporary account notes of her;

There was a woman at Alexandria named Hypatia, daughter of the philosopher Theon, who made such attainments in literature and science, as to far surpass all the philosophers of her own time. Having succeeded to the school of Plato and Plotinus, she explained the principles of philosophy to her auditors, many of whom came from a distance to receive her instructions. On account of the self-possession and ease of manner, which she had acquired in consequence of the cultivation of her mind, she not unfrequently appeared in public in presence of the magistrates. Neither did she feel abashed in going to an assembly of men. For all men on account of her extraordinary dignity and virtue admired her the more.

Admired as she was Hypatia came to an appalling end. Believed to be the source of friction between Orestes, the Imperial Prefect, and Bishop Cyril of Alexandra, she was attacked and murdered by a Christian mob in March 415. The same source reports;

Yet even she fell a victim to the political jealousy which at that time prevailed. For as she had frequent interviews with Orestes, it was calumniously reported among the Christian populace, that it was she who prevented Orestes from being reconciled to the bishop. Some of them therefore, hurried away by a fierce and bigoted zeal, whose ringleader was a reader named Peter, waylaid her returning home, and dragging her from her carriage, they took her to the church called Caesareum, where they completely stripped her, and then murdered her by scraping her skin off with tiles and bits of shell. After tearing her body in pieces, they took her mangled limbs to a place called Cinaron, and there burnt them.

Although her reputation, and her scholarly achievements, went into hibernation for a long time, she made a reappearance during the Age of Reason and has never really gone away since. In 1843 W. G. Soldan and H. Heppe, two German authors, published The History of the Witchcraft Trials, in which they argued that she may have been history's first famous witch, not a terribly plausible contention, I have to say. Pagan martyr, certainly, but there is really no evidence that she practice or was accused of witchcraft.

It's not just in scholarly monographs that the great lady makes an appearance, no; she's is to be found in painting, poetry and literature. Charles Kingsley devoted a whole novel to her; she even makes a brief appearance within the pages of Proust. More recently she made it into the movies in Agora, with Rachael Weisz in the lead. And she has not been forgotten by science, especially astronomy. An asteroid belt, 238 Hypatia, was named after her, as was a lunar crater. Hypatia, unlike the monsters who tortured her to death, will truly live forever.