The Myth of the Green Man 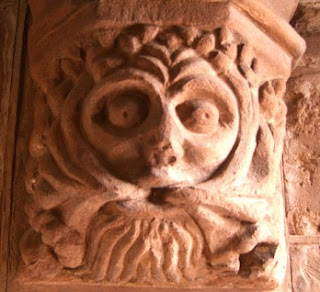 The Green Man has become one of the iconic figures of the neo-pagan movement. No; I would go further -he has become the iconic figure; he has been ever since the 1930s when he had that name bestowed on him. Rather ironic, really, for the simple reason that he has nothing at all to do with traditional paganism. The Green man, rather, is a Christian symbol, a personification of evil, not of benevolence and fecundity.

No sooner had the latest issue of History Today landed through my post box with its usual reassuring and heavy thump than my attention was drawn to the lead article, Ballad of the Green Man by Richard Hayman, an excellent overview of the genealogy of a myth. It the whole thing fascinates me on a number of levels; but most particularly, and most immediately, in the way that history becomes myth and myth history, one feeding of the other in and endless cycle of reinforcement. Here we have 'tradition', here we have Olde England, where the Green Man walks hand-in-hand with Robin Hood, another figure of the wild woods, closely accompanied by the Queen of the May or the Lord of Misrule. I think it's time to get back to basics.

The Green Man, as Hayman says, first made his appearance in the eleventh century, a face sprouting foliage from his mouth, to be found in church carvings and decorations. He was part of a Medieval iconography which disappeared with the Reformation only to make a reappearance during the nineteenth century Gothic revival. Modern interpretations-entirely alien to the Medieval mind-saw him as an earth figure. William Anderson in The Green Man, published in 1990, saw him as "the archetype of our oneness with the earth", while John Williams in the more recent The Green Man Tree Oracle, says that he promises "ancient wisdom from the spirit of nature." And thus something is conjured from nothing in a fog of cloudy an essentially meaningless words!

Most of this nonsense can be traced back to the early part of the last century, when the folklorist Julia Somerset, Lady Raglan, started to take an interest in Green Man carvings, linking the figure to pagan tree worship, for which she drew heavily on Sir James Frazer's The Golden Bough. This whole drift was given added reinforcement by the publication in 1921 of The Witch Cult in Western Europe by Margaret Murray, as fraudulent a piece of 'schlarship' as ever made its way into the English language. All this fashion achieved was to obscure the true significance of the foliage-disgorging face.

As I said at the outset, the Green Man only makes sense in the context of Christian symbolism; there is no evidence at all that the figure existed in pagan times. To understand him we must take account, Hayman says, of the way the Medieval Church viewed nature. In Christian art nothing ever appears in a wholly neutral form; plants or animals, rather, embody a virtue or a vice. Vice and sin are most often to be found in wild nature, places where the greatest dangers lurk. For you see, the wild wood was the place where Satan hid, ready to entice the faithful from the true path. Rabanus Marus, Archbishop of Mainz, an influential ninth century theologian, even described leaves as representing the sins of the flesh. 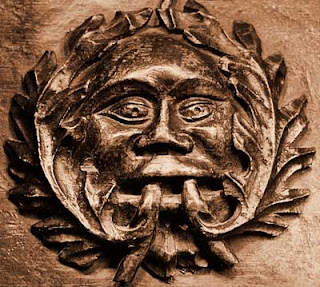 So, then, the face staring out from the trees, himself part plant, was a symbol of the grotesque and the dangerous in nature, not benevolence or fertility. This is the Wild Man, not the Green Man. Hayman also says that only a proportion of the extant figures are actually men; the others are demons, masks or cats. Theses figures first came into existence as illustrations on the margins of books, caught in a tangle of vegetation that acted as a metaphor for the human condition-that which trapped people physically also impeded their spiritual progress. When they make an appearance as reliefs or carvings in churches they do so in a demonic form. The further back in time one goes the more demonic they become. 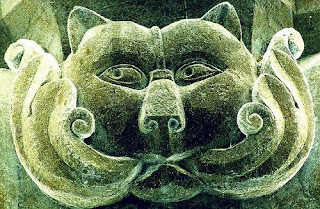 For contemporary audiences the message was clear and immediate. But with the Gothic revival the Green Men lost all of their original spiritual significance, just becoming part of a supposedly authentic Medieval style. It was an easy step from there for people like Raglan to give them a new, entirely contrived message. Reborn for a modern age, an age sinking in forms of nature worship, he made its way into Wicca, one of the great manufactured religions, depending on invented traditions of one kind or another, depending on a caricature of paganism and witchcraft. How the Green Man must be laughing. 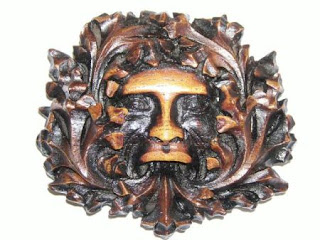