Of Fish and Fools 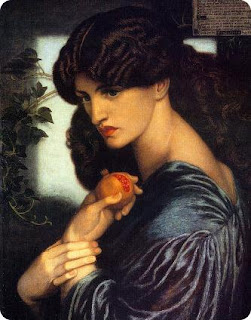 In Greek mythology Persephone, the daughter of Demeter, is abducted by Hades, God of the underworld. In her frantic search for her lost daughter, Demeter neglected to allow the earth to flourish. As hunger grew, and people cried out to Zeus, he forced Hades to return Persephone. But in the meantime she had been tricked into eating six pomegranate seeds which meant that she was obliged to return to the underworld for six months of the year. And thus the Greeks explained the waxing and the waning of the seasons.

In the Epodes Horace says that Proserpina, possibly the Roman equivalent of Persephone, was worshipped by witches. There is really no surprise in this; for she is a goddess who can command both worlds, that of the living and that of the dead. She is the great Necromancer, presiding over death though not dead herself.

Proserpina is often depicted holding a fish, one of her sacred creatures and thereby hangs another tale! For she is the secret deity at the heart of April Fool’s Day, known in France and Italy as April Fish Day. In these countries it was once the fashion to pin a paper fish to the back’s of unwitting victims. Although All Fool’s Day only appeared in Europe in the Middle Ages it can be traced right back to Roman times, to the myth of Proserpina and Ceres, her grieving mother.

After being abducted by Pluto, Lord of the Dead, Proserpina called to her mother for help. But while Ceres could hear the echo she could not find her daughter, no matter how hard she looked. This fruitless search was commemorated by the Romans in the festival of Cerealia, believed to be the origins of the fool’s errand popular on 1 April.
Posted by Anastasia F-B at 16:36