France and the Jews 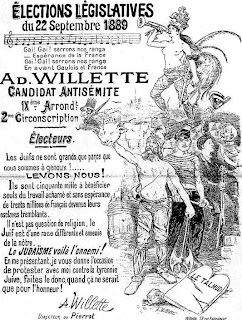 There had long been a tradition of latent anti-semitism in French society, evidenced by some of the responses to the Dreyfus Affair, though in the prosperous years of the 1920s this was but of marginal importance. The onset of the Depression, compounded by the influx of German Jews seeking refuge from Hitler, brought a fundamental change in attitudes.

Increasingly bad, the general political atmosphere became quite poisonous with the creation of the Popular Front government in 1936, headed by Leon Blum, a Jew. In March 1936 Charles Maurras of the right-wing Action Française, wrote "One thing that is dead is the spirit of semi-tolerance accorded to the Jewish State since the War...A formidable 'Down with the Jews' smoulders in every breast and will pour forth from every heart."

Maurras went on to call for the murder of Blum, though he was far from being the most violent anti-Semitic propagandist. That dubious honour surely belongs to the novelist Celine, conceivably the most eccentric genius France has ever produced. His diatribes against the Jews in Bagatelles pour un massacre and École des cadavers were so delirious that Andre Gide even suggested that they might be intended as a Swiftian satire. One critic went so far as to suggest that he may even have been paid by the Jews to discredit anti-Semitism!

People like Celine were never going to escape from the outer limits of political sanity, but anti-Semitism became an acceptable mode of discourse in the political mainstream, even cutting across the divide between left and right. It also became intertwined with new forms of pacifism, increasingly strong in post-war France, which argued that the Jews and the Communists were pushing the nation towards conflict with Nazi Germany.

During the Sudeten crisis in the summer of 1938 Ludovic Zoretti, a Socialist, wrote that France did not want to "kill millions of people, and destroy a civilization just to make life a bit easier for 100,000 Sudeten Jews", a sentiment echoed by Armand Chouffet, a Socialist deputy, who said "I've had enough of the Jewish dictatorship over the Party...I won't march for a Jewish war."

So, the mushroom grew in dank soil; a soil of economic crisis, fertilised by resentment of refugees, anger over alleged Jewish influence in politics and society, and a fear of of being lured into a new war.
Posted by Anastasia F-B at 11:43